Katy Perry Speaks Out Against Rihanna, Won’t Be The First To Apologize 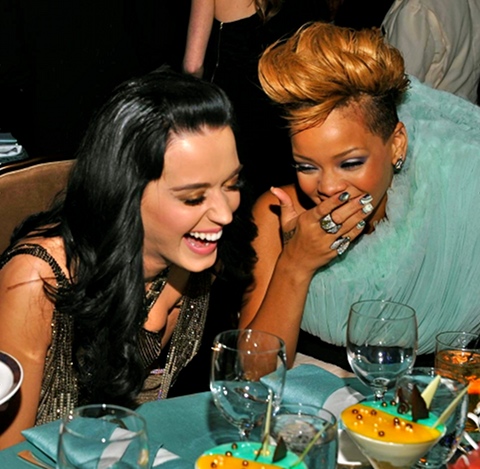 It sounds like Katy Perry is pretty much over Rihanna. The two used to be a girl power duo, constantly giggling together and cracking jokes. We were even dreaming of a kick ass Spice Girls 2 situation, but the former besties are totally over each other. We saw them sitting together at the MTV Video Music Awards, when Nikki Minaj famously dissed Rihanna by refusing to hug her (or even acknowledge her!) on her walk to the stage. Everything seemed to be going well for the international celebs, but Katy Perry describes an ‘incident’ as the root of their distance.

Katy explained: “We’ve had dinner, and that’s about it, I didn’t reach out to her after the incident. I think she is doing fine. I don’t know. Her personal life has probably already been blown out of proportion. I don’t really have to go into that. I’m sure she probably want’s a break.”

Well we certainly appreciate Katy being a true friend (even if their relationship is finito!) and keeping mum about the personal life. Super classy, chica! But what the heck is this incident? We think it’s got to be related to Chris Brown. Rihanna has been criticized (in a loving, worried way) about revisiting her amour with Chris Brown, who brutally beat her a few years ago. Besides returning to an abusive relationship, she’s setting an awful example for her fans! Could Katy be backing off because she just can’t deal with Rihanna’s decision?

A lot of people put their significant others before besties, and I wouldn’t be surprised if that’s exactly what Rihanna has done whether she recognizes it or not! Of course, no one wants to hear that they’re making a mistake. I bet Katy spoke up and Rihanna just shut her out. And duh, I think any legit celeb hates being in the news–note legit, which automatically rules out all reality TV stars. What do you make of this? Katy cat fight!