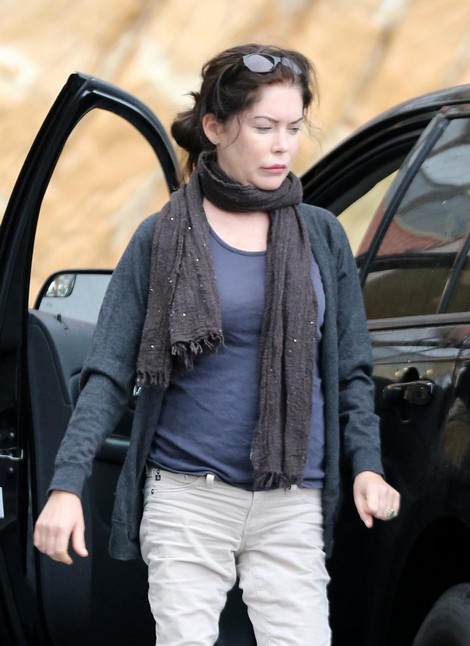 Why do I do a double take every time I see Lara Flynn Boyle? I swear she looks exactly like Lindsay Lohan; over inflated lips and all.  Whoever is married to that must be into necrophilia, because Lara has lost so much weight she is the walking dead.  Guh-ross!

The Enquirer is reporting a recent sighting of the reclusive starlet and it wasn’t pretty.  She was seen pumping gas at a station in Santa Monica, CA.  Lara was sporting the latest anorexic accessory…a distended stomach.  Adding to her ensemble was her signature over done unnaturally puffy face and inflated lips; which could rival that of a mackerel. “She’s a mess, Jack’s very worried about her and he’s not the only one! She’s not eating, and her behavior has become increasingly bizarre,” said a close friend of Lara’s.

The last time Ms. Boyle was seen out in public prior to her gas station trip was during the Labor Day holiday.  She was observed wearing a skimpy bikini showcasing her rail thin body in all of its glory and walking around like a newborn calf; unable to maintain her balance.  Was she inebriated or did the lack of nourishment in her system prevent her from having any type of motor skills?  I’m sure her babysitter, who was seen holding Lara up, brushing her hair and keeping her clothes on straight, would know what the deal is.

Lara, are you anorexic or bulimic?  Do you have some sort of sickness or disease that you are scared to disclose?  Let your fans or the general public know what’s going on?  The last thing we want is for you to end up lying in a bed resembling a character from the movie SE7EN with pine scented air fresheners hanging over your head to mask the smell of decay.  Snap out of it already.  The waif model look went out in the 90’s and your look is not cute.