Barack Obama Wins Election: What The Celebrities Had To Say 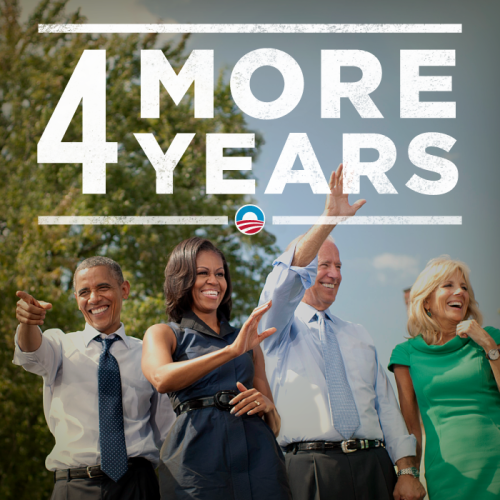 Barack Obama‘s win last night was probably one of the most anticipating moments of many people’s lives. The vote between Mitt Romney and Obama was supposedly so close, Barack won by just 4% according DailyMail. As the news broke that Obama would stay in the White House for at least another four years, celebrities took to Twitter to share the joyful news to their fans within minutes after the announcement had been made.

Eva Longoria, Mariah Carey and Kelly Osbourne were among the stars who had tweeted their support for Barack after being spotted casting their vote earlier in the day. Obama had tweted: “We’re all in this together. That’s how we campaigned, and that’s who we are. Thank you. -bo”. Below are some of the celebs who reacted to the news, shortly after the announcement at 11:20PM.

Armando Iannucci, creator of Veep and The Thick of It: “Mitt Romney, your team took one hell of a very close race… I’m heading down to the White House.”

Whoopi Goldberg: “I’m so happy, now that it appears Prez.Obama has won will all you racists & nasty vitriolic angry folks go away & take your crap [with] you. We as Americans have work to do & we dont have time 4 bulls**t & we don’t have time 4 ur bulls**t.Prez.Obama won & crying foul ain’t gonna fly.”

Eva Longoria: “Amazing speech by @BarackObama re-elected for his 2nd term! America is and can be united for the greater good of all Americans!”

Katy Perry: “The people have the power! Proud to stand by you for 4 more years.”

Michael Moore: “This… Is America. 2012. The old days, the old ways, officially gone. This is who we are now. Sorry, world, that you even had to worry…”

Donald Trump: “Well, back to the drawing board! He lost the popular vote by a lot and won the election. We should have a revolution in this country… This election is a total sham and a travesty. We are not a democracy! Our country is now in serious and unprecedented trouble…like never before. Our nation is a once great nation divided! The electoral college is a disaster for a democracy.”

Ian Somerhalder: “I’m so proud of us as a people.Even people in other countries contributed to this event. A global group hug…Wow. Wow. Wow.”

Lady GaGa: “I just got off stage in Columbia!! Congratulations Mr President @BarackObama We are so proud to be American tonight! YES!!! YES! YES!! We just couldn’t be happier my goodness, the joy when freedom prevails.”

Russell Simmons: “We have incredible momentum to build upon the remarkable accomplishments of [Obama’s] first term, and I very much look forward to working with his administration to further advance the goal of creating an America built to last.

“There are many challenges that still face this nation, however I am confident that President Obama through his leadership will restore our democracy to the people. We must find more ways to work together, as the future is not a Democratic future or a Republican future, but an American future.”

Meanwhile, Donald Trump had a Twitter meltdown, seeing by how upset he was upon hearing Obama had won the election. The muti-billionare tweeted: “He lost the popular vote by a lot and won the election. We should have a revolution in this country,” Trump tweeted. “We can’t let this happen. We should march on Washington and stop this travesty. Our nation is totally divided! Let’s fight like hell and stop this great and disgusting injustice! The world is laughing at us.”

What do you make of the election, and if you care to share, who did you vote for? Romney or Obama?!