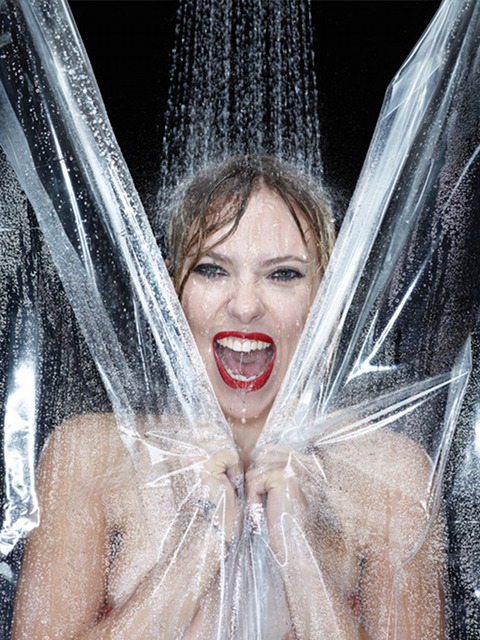 Fans of Alfred Hitchcock are dying for the soon-to-be-released biopic Hitchcock, which chronicles the director’s life while he was working on the classic thriller Psycho. Due out in a few weeks, and with a hugely talented cast (Scarlet Johansson, Anthony Hopkins, Helen Mirren, Jessica Biel, and James D’Arcy, to drop a few names!), interviews are starting to circulate to tease fans. Scarlet, who plays the real actress Janet Leigh/ Psycho character Marion Crane (who is brutally murdered by a mysterious figure while at the Bates Motel), confessd that being pretend-stabbed by Anthony Hopkins was terriftying. In V Magazine, she explained:

“We only had the luxury to shoot the scene for a day, and everybody was feeling very nervous because it involved water and nobody wants the actor to get wet. They were concerned with modesty and all these things – but I don’t care about any of that stuff and Janet Leigh never did either. As much as Anthony Hopkins is a pussycat, he’s terrifying. Maybe I watched ‘Silence of the Lambs’ too many times when I was a kid. Maybe I was having some flashbacks. So I didn’t need too much preparation for the scene.”

The photo above is a promo pic from the movie, which is already generating Oscar buzz. It tells the story of Hitchcock’s struggled while he was making Psycho, particularly with his wife. Of course, we’re all excited to see behind the scenes of the man who has haunted dreams for decades. I’m imagining an even darker My Week With Marilyn–and Anthony Hopkins as Hitchcock is incredible! Will you be heading out later this month to see? What do you think of Scarlet as Janet?