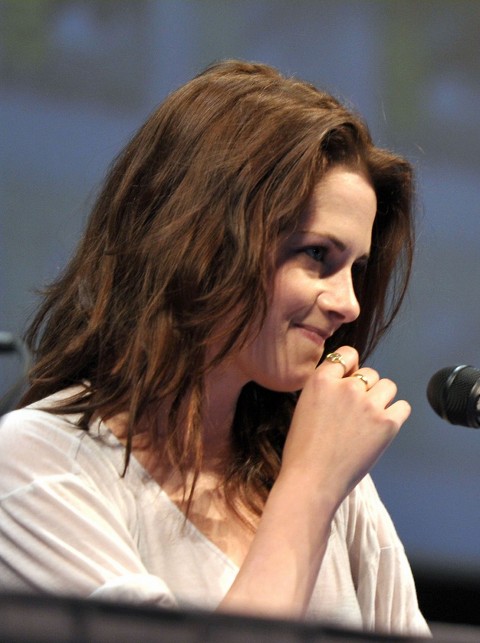 Don’t mess with the young vampire! With barely a week until the premier of The Twilight Saga: Breaking Dawn Part 2, Twihards are clawing at theater doors, dying to find out what the final installment will contain. We all know about the flash mob dance, which will be included in the DVD extras (and not during the credits, as Nikki Reed and Kellan Lutz previously hinted), but the “twist” that director Bill Condon promised has been under top security–until a clueless reporter mentioned it during a Q&A panel with the cast! Spoiler Alert!

The idiot reporter tried to ask a question,”The montage at the end of the movie kind of sums up–” And Kristen Stewart cut him off, shaking her head, “Shh! Just, maybe everyone watching this, don’t listen to anything he’s saying right now!” The guy had no idea what she meant and continued: “It kind of summed up everything you’ve been working on and everything that you’ve been doing for the last so many years. What was it like the first time you saw that?”

Of course, the cat was out of the bag, so Kristen answered him. “Yeah, no. Yeah, no. I actually saw it a while ago and it–I wish I had a better way of saying it. It’s crazy. It’s so crazy. You typically just don’t get that opportunity to look back. I saw it again recently, I just saw the final cut. I couldn’t. Nope. It was a good thing that noone was around. I love that Bill sort of…my favorite thing about him is he understood, really put his finger on what drives this thing…this thing is romantic, it’s what is attractive about it. It’s what is so, sort of stirring. I think if anyone was going to try to be cool about it, it would have been a shame…Bill lent himself to it so fully…You can tell he’s a huge fan of the story…It’s a nice little knife twist as well.”

So, fans, prepare yourself for an emotional roller coaster, looking back on the story from the beginning! I do feel obliged to remind Kristen–you do “get that opportunity to look back,” because it’s available on special edition, mega Blu Ray combo DVD steroid pack. But I guess she forgot about that? Rather than a look back at the characters, I hope we get some behind the scenes stuff. Will you be at the movies next weekend?