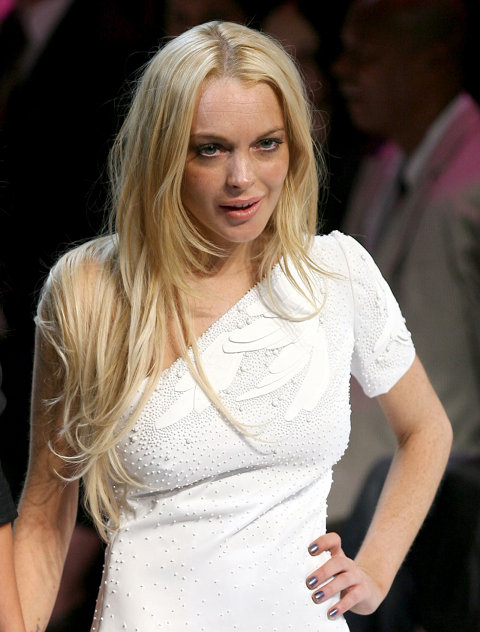 Well, that isn’t the factual timeline (although I’m pretty sure this girl is hammered 24/7!). She hit the pedestrian over the summer, but just recently decided to cancel an interview with Barbara Walters for a 20/20 special. Why? A source explained that Lindsay Lohan wasn’t happy with the way producers wanted to take the show, which means she doesn’t want to give an interview about getting cut by her mom in a limo fight while on cocaine, driving into cars and humans alike, being drunk, violating probation, having bad hair color, and failing at her career.

Actually, when you put it like that it doesn’t sound so bad. But couldn’t she stop acting like a worse version of Charlie Sheen, grow up, cut the drugs, and have a real conversation about the decisions that have led her down a rocky path and straight into prison? Because that’s where she’s headed, as her lawyer has just reminded her that she lied to a cop about a driving accident, which will be legally charged as “obstruction of justice.” But I think Lilo is more than just an obstruction, she’s actively working to undermine the physical safety of everything around her!

It hasn’t all been drinks at Chateau Marmont and stealing necklaces for Linds though. She also lost her publicist, Steve Honig, who has refused to explain his sudden departure out of respect. Which means he needed a job that didn’t have him choreographing calls between TMZ and LAPD all night long. Poor guy probably quit, went home, and slept for two weeks straight.

Lindsay’s PR team hasn’t released any information about Lindsay’s sudden cancellation (then again, they never do. She was supposed to be on Ellen Degeneres and just skipped unexpectedly!), and Lindsay has been totally silent on Twitter, which hopefully means all personal electronics have been confiscated, along with her car keys. What do you make of the red-headed, death-daring vixen? Innocent party girl villanized by a cruel medial (that’s me!), or seriously troubled threat to all that is pure?