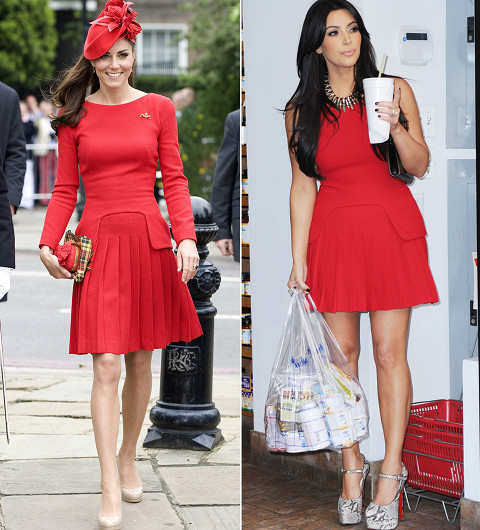 Take a minute to get your choking laughter under control. Kim Kardashian is so truly delusional that she thinks the future Queen of England is going to go so low brow as to wear the trashy collection of an even trashier family whose greatest accomplishment is a sex tape. The sister trio was in London this weekend to celebrate the launch of their line Kardshian Kollection at the Westfield Shopping Center. We know Kate Middleton is the people’s princess, shopping at Top Shop and recycling outfits, but that doesn’t mean she is going to don the skanky line of America’s Royal Fame Whores!

Kim explained, “Kate seems like a really sweet person and she’s a princess. We love her sense of fashion. She could wear our looks and team it with one of her hats.” Oh of course! Well, Kate is not actually a princess, and those little hats are called fascinators! Kate is rarely seen in bedazzled club hopping attire, and I doubt she’s going to start now. Most of the KK pieces feature the logo in rhinestones, or are skin tight. Perhaps Kate plans to conceive the royal heir in one of their intimate pieces?

I think this just goes to show that Kim fails to understand that not all publicity is good publicity. Despite the huge amount of media attention she gets, it isn’t because she’s a classy style icon, it’s because she’s a boiling pot, waiting to spill over and make a huge mess at any moment. The public doesn’t look to her for her brains, but for her ginormous ass that is often barely covered by stretchy, translucent fabric. You’d think that Kanye West telling her he wants her to look and act more like Kate would be a hint that the two women are playing in totally different leagues, but it went in one ear and out the other! My jaw would drop if Kate ever wore Kardashian Kollection. Do you think it will ever happen?