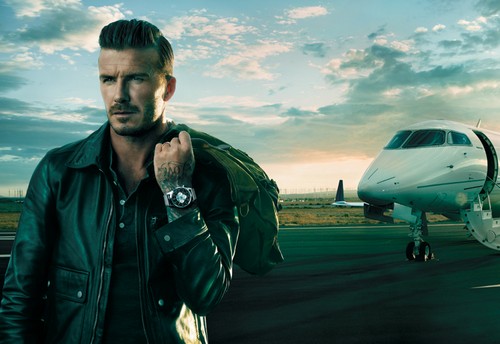 No one can bend it like Beckham. In fact, not even David Beckham himself can bend it like Beckham anymore. The once on-top-of-the-world mega soccer star is the new face for watch makers Breitling’s advertisement campaign. He will be advertising their Transocean Chronograph Unitime worldtimer watch. What the duck is that? It sounds like a James Cameron film!

The 37-year-old soccer star wrote on his Facebook account, “I’m proud to be partnering with Breitling, here’s some behind the scenes footage from my new campaign.” The next day, Beckham followed up with, “Good to see that you were so positive about the Breitling story. Thought you’d like to see some more images.” We can’t imagine David Beckham saying that without bursting into laughter and rolling around on the floor like manic stepchildren. The man might have the build of a male model, the sex appeal to kill a small person in Italy, and the coolness to ice over an Eskimo, but he sure as hell doesn’t portray that in his itsy bitsy voice!

You might remember Beckham’s front page advertisement campaign for Armani underwear, his under-wraps affair with that other woman, and his evil looking superstar wife, but nowadays the Beckhams are as quiet as dead neighbours. There’s no huge scandals hitting them around every corner, nor are there any life changing superstar snaps of the couple chilling with – who was it? Tom Cruise? The faded star of the Beckhams only once lit up during the royal wedding ceremony, and sparkled a few times after that, but it never reached that burning intensity it once had.

In the words of David Beckham, “It’s jus’ a woyal weddin’ wif ma wife.” Yes, Daffy Duck, the royal wedding that punched your fame in the face and called it James Franco.  Check out the behind the scenes footage of David Beckham’s new ad below.