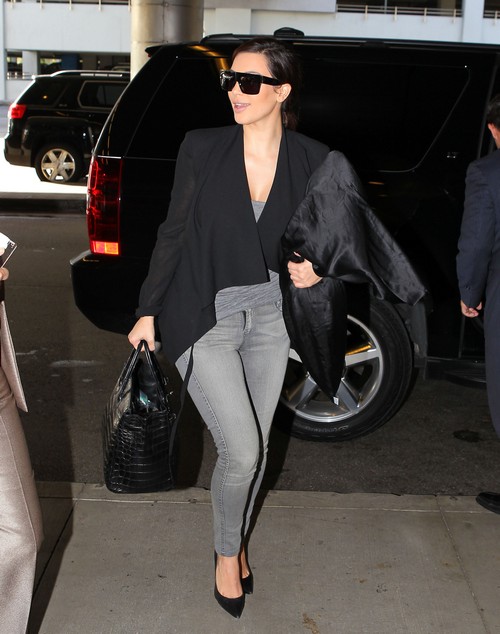 It sounds like Kanye West’s “Perfect Bitch” isn’t exactly carrying herself like the perfect sister lately.  Kim Kardashian has always thought of herself as THE brightest star in the Kardashian family and so there is always more than a little tension when one of her sisters does well in their career. It looks like the green-eyed monster wears the Kardashian Kollection, especially lately.  Things have been pretty rocky on the home front ever since Khloe Kardashian landed the prized hosting gig beside Mario Lopez on The X Factor.

According to Life & Style magazine “Kim is extremely jealous of Khloe’s career . Kim feels like Khloe has become the breakout star of the family and she hates it.”

Of course in between tweeting photos of her getting-bigger-by-the-moment assets, Kim is publicly supporting Khloe and is pimping The X Factor big time.  I’m sure she is fuming though. Kim’s known for that huge ego and finds ways to keep extending her fame while doing precious little. Khloe is a novice host but if she does well, it can launch her career into another direction all together.  She may end up being famous for her real job rather than being famous for her ridiculous failed relationships like big sister Kim is.

How ugly do you think this fight really is?  Is it just typical sister stuff or worse?  What role do you think Momager. Kris Jenner is playing in the feud? I could see her using it to try to push Kim to work more. We have seen Kim get jealous on camera before and let me tell you she turns into a spoiled brat. I’m betting at this point in life Khloe has no patience for that! Will Kim’s jealousy ruin their relationship while Khloe is on X Factor? Tell us your thoughts in the comments below!