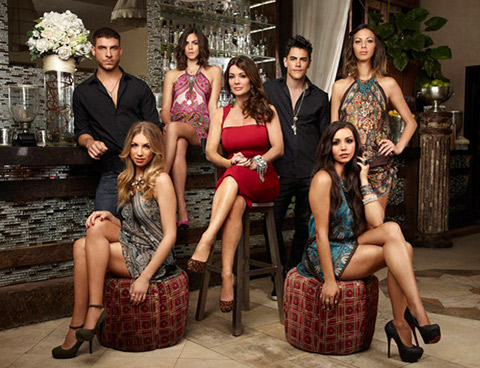 If you aren’t getting enough of the delicious drama that comes from the wild lives of the Real Housewives of Beverly Hills cast, look no further! Mostly sane Brit Lisa Vanderpump has secured a second show with Bravo, called Vanderpump Rules, which follows the lives of her employees at uber chic restaurant SUR. Lisa seems to be the only housewife who acutally has work to do–the others are unemployes or come from family money (think making appearances instead of doing work!). Her restaurants are hugely popular with the Hollywood elite, and Villa Blanca was just honored by a visit from Honey Boo Boo, who ordered “sketti” and ate it like a utensil-less cavemen on caffeine.

Lisa has been doing alright on this season of RHOBH. Last year, she was in the center of the fight when Taylor Armstrong tried to stage an anti-Lisa conversation during a tea party, but that all changed after Lisa took the high road and chose Taylor as her new charity project. She’s become an ally of controversial Brandi Glanville, who notoriously accused Kim Richards of using crystal meth during a party. Whether the network is looking to boost ratings or just milk the talent we don’t know, but Vanderpump Rules looks like 42 minutes of unadulterated adultery (if such a thing is possible).

The series premiers 7 January on Bravo. Will you tune in to watch sexy/trashy twenty something waitstaff act like hookers, or are your Monday nights filled with more pressing TV?