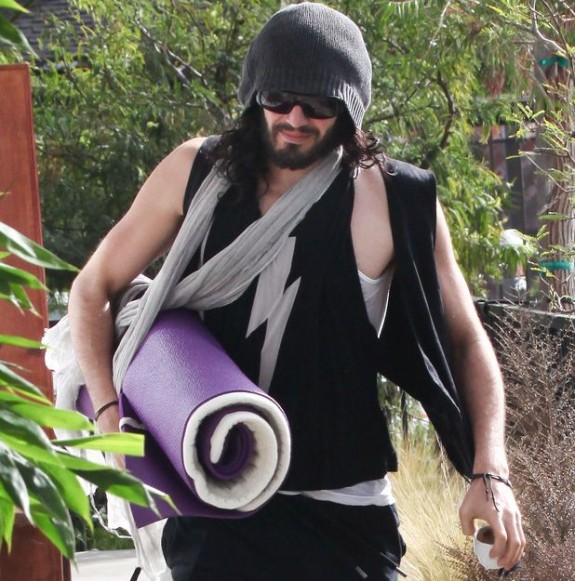 When you hear the words “celebrity hits pedestrian,” several possibilities pop into your head. Lindsay Lohan and Amanda Bynes were on the top of my list, but Russell Brand, AKA personal friend of the Dalai Lama, was the last person I thought of. The British comedian has made news this fall for being kind to strangers, mostly the homeless! He’s gone out of his way to take them to breakfast and help them clean up, citing his own rocky history as a drug and sex addict as motivation to help others.

But this morning while driving his Range Rover in LA, Katy Perry‘s ex husband hit the shopping cart of a homeless man. Rather than speeding off in to the sunset like some other celebs we could mention, he promptly hopped out of the car and ran to the man, who was uninjured. Russell helped him gather the man’s spilled belongings and the two went on their ways.

Russell has been very open about his struggles with substance abuse, and despite having just celebrated 10 years of sobriety in October, the actor still recognizes personal vices. Since his split from Katy Perry, he’s been attached to several woman, and often jokes about his careless sexual escapades. It’s the cycle of addiction–quell one and develop another. He has cited kundalini yoga as the source of his true happiness; it’s a form of yoga that is supposed to develop spiritual and mental strength, which seems great for an ex-addict. But could Russell’s jokes be a cry for help?

Despite his questionable beard and tiny pants, he seems like a decent guy. So what happened that he drove into someone? His career has been booming–did you see him perform at the Olympics closing ceremony?–and his TV series Brand X is a huge success, so why the weird behavior? I sincerely hope this is an isolated incident and that our dear Russell is going to stay healthy and strong!