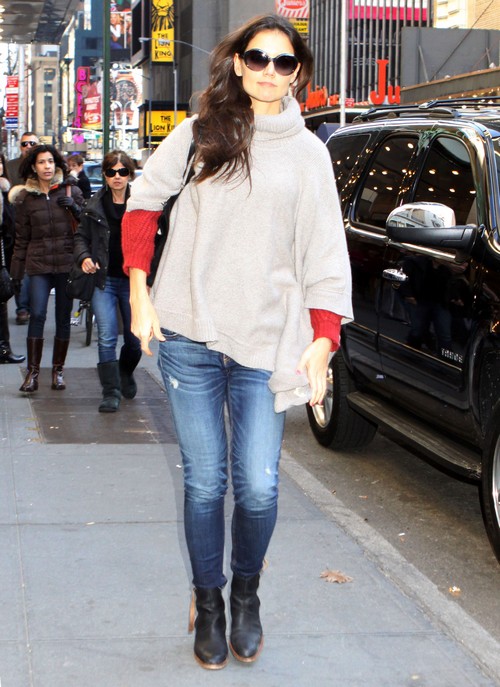 Katie Holmes was caught kissing a new man, her leading man that is.

Katie is currently appearing on Broadway at The Music Box in a new play Dead Accounts.  Katie is starring alongside Norbert Leo Butz and Josh Hamilton.  Katie plays Lorna and Norbert plays her brother Jack.

Dead Account, is the story of a brother, a sister, and a surprise reunion that turns their family upside down. A $27 million secret proves that the truth can be complicated.

Josh plays Lorna (Katie Holmes) love interest and at one point in the play Katie plants a huge lip lock on Josh.  Reportedly tongues are wagging about the kiss.

Last weekend I decided go and see the play.  Rather than the kiss, what I would be talking about, is Katie’s poor acting skills.  Norbert Leo is brilliant in the play and  Katie Holmes, not so much…..

Her idea of acting, is over acting, screaming and making funny faces and weird wide eyed looks.  The girl cannot act, it is clear the only reason they hired Katie was because of the buzz they thought she could create.  After all she is Tom Cruise‘s ex wife.

Meanwhile Kate who split from ‘Mission Impossible’ star Tom Cruise in June after six years of marriage is rumored to be spending Thanksgiving with her ex-husband.

A source previously said: “Tom and Katie are determined to show Suri that they’re still friends and devoted parents.  They know it will mean so much for her, and both are happy to swallow their pride to make sure she has a fun holiday. Thanksgiving has always been a really big deal for them.”