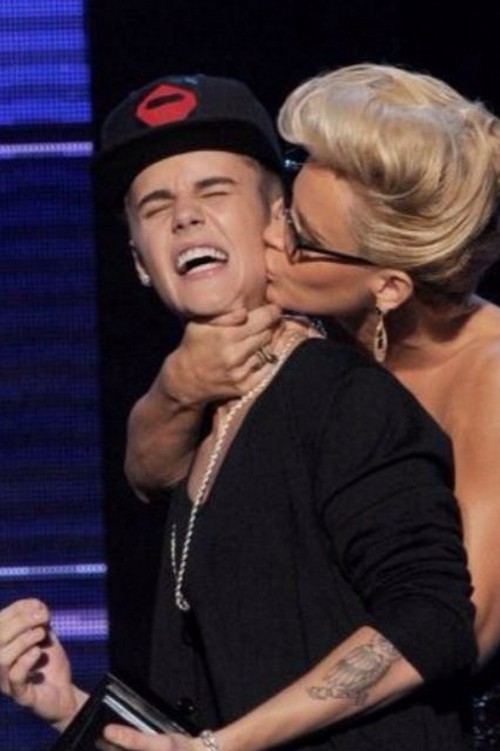 What out Beliebers! Jenny McCarthy grabbed Justin Biebers’ butt and kissed him and we have the photo evidence for you!

Jenny McCarthy is not shy, the former Playboy model presented Justin with the pop/rock album prize for his record ‘Believe’ at the AMA Awards last night.  Jenny admitted she couldn’t resist giving the “delicious” star’s butt a squeeze.  She said, “I did grab his butt. I couldn’t help it. He was just so delicious. So little. I wanted to tear his head off and eat it!”

Not one to stop there Jenny also grabbed a kiss from Justin and Justin looks like he wants to vomit in disugst.  In response to the kiss he said:  “Wow. I feel violated right now!”

Jenny posted the picture above of  the kiss on twitter and wrote: “Cougar rape #poorjustin (sic)

Although there rumors have been circulating that Justin and Selena Gomez are still split.  Jenny tweeted the following tweet after the kiss picture. “My cub @justinbeiber brought his acceptable and beautifully aged beauty Selena to the AMA after party. Guess I’m back on the prowl. Rww!”  Seems like Biebs and Selena are back on!