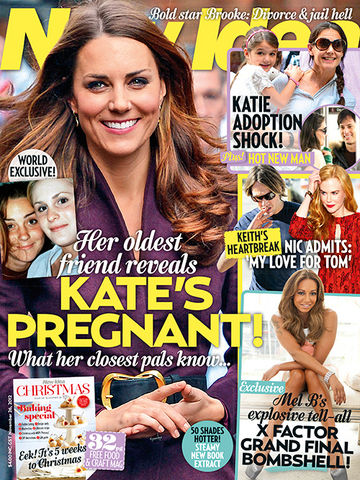 The current issue of New Idea magazine has the bombshell story “Kate’s Oldest Friend Reveals She Is Pregnant.”  Since the day that Prince William married Kate Middleton there has been speculation that she has been pregnant, all of it wrong of course.

In a World exclusive New Idea is claiming that they have the scoop of Kate and William’s upcoming announcement.  A close friend and old schoolmate of Kate’s Jessica Hay revealed to them, “Kate has ‘wonderful, happy news’ to share, with next month tipped as the deadline for the revelation.”

Royal watchers have been abuzz speculating that  Kate’s recent weight gain is baby related.  If we are to believe New Idea they are right and we should hear a baby announcement soon.  What do you think is Kate pregnant or is this just more groundless speculation from the magazine to sell magazines?  Hit the comments and let us know what you think!