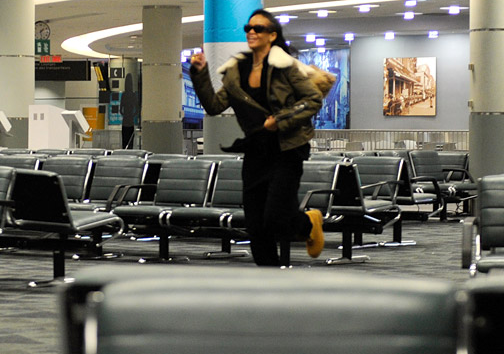 Rih-Rih honey, you startin’ to lose money which probably isn’t what you wanted but it’s all your own damn fault. Yes, Rihanna has been handed a fee of $320,000 after continuously being late for her schedules flights that would take her to the next destination of her 777 tour (hitting up seven different countries in seven days).

The trip which invites 150 journalists and reporters to follow the Bajan singer along her adventure to each show, has delayed flights taking off, holding up the airport runways as she has supposedly arrived late for EVERY flight during the tour. The fee has staggered to hundreds of thousands and may go higher if she doesn’t get it together.

According to reports, her team constantly make calls to airports throughout the night that Rihanna may be a “little bit late” but ends up not showing for hours, while passengers who have been invited on their trip sit in patience for the singer to arrive for take off. Note that delaying the flights has also ruined time schedules for her tours. According to sources, thanks to Rihana’s constant delays, she has delayed every show by at least two hours (we can actually back this up, seeing that she was THREE hours late when we saw her live — fans booed her throughout the night).

“Rihanna delays going on stage, which throws out the whole schedule,” an insider is quoted as telling The Sun. “It’s a reaction to the fact that every second of her time is accounted for by organisers. She likes to be in control. Her team have been making frantic calls throughout the night to the airports. Every hour that goes by she has to pay for flight clearance on runways, and also incurs costs of the private airport teams, customs, baggage handlers and security. The tour will end up costing her a fortune.”

Rihanna, get it together because you’ll be losing a hell of a lot of money from this if you continue this nonsense!!