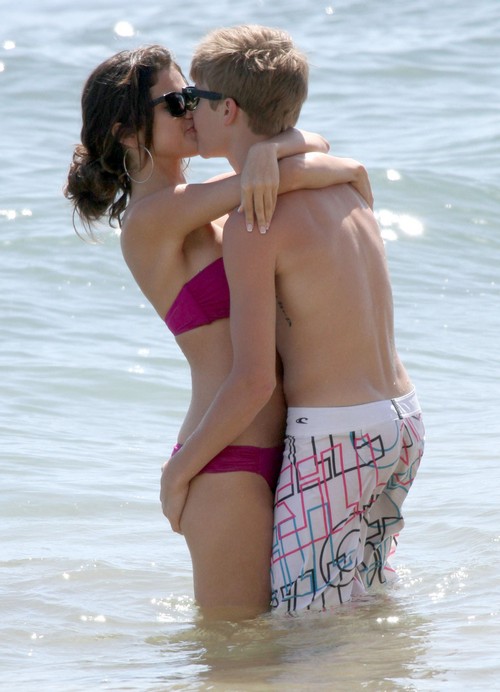 It looks like it may not be the end of the road for Selena Gomez and Justin Bieber after all.  I mean, you don’t keep making public appearances if you’re not together or at least trying to reconcile. After appearing together at an AMA after party on Sunday night, Justin and Selena were spotted out again last night, this time they grabbed dinner at Benihana, one of the couples’ favorite eateries. Justin arrived after a workout at Equinox and Selena unsuccessfully tried to hide from the swarm of paparazzi that were aiming to catch a glimpse of the couple together.

Despite the fact that the split was initially very public, it certainly doesn’t appear to have lasted for long. There have been three public outings for the twosome in the last week. While it was rumored that Selena wouldn’t dream of attending the AMA’s with Justin after his hookup with a Victoria’s Secret model, The Hollywood Life tells a different story,

“It’s not that Selena didn’t want to come to the AMAs, she just didn’t want all the attention to be on their relationship. She wanted it to be about the music and let Justin just be there for his fans. She still loves Justin. The love is still there, they just need to disappear to an exotic island together.”

I think at this point it’s pretty obvious that Selena is working on forgiving Justin for whatever may have happened and they are still together. I just don’t understand why she feels she needs him. Why is she sticking to the baby pool when she could have a grown man by her side?  I would think the appeal of being with a teen heartthrob would have gotten really old by now, wouldn’t you?

Will Selena and Justin manage to get past this hurdle together and will their relationship thrive or are they just dragging out an inevitable ending to their love story? Tell us your thoughts in the comments below!