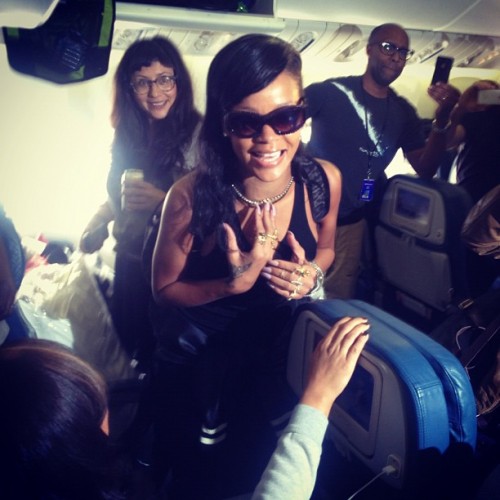 Journalists who accompanied Rihanna on her trips around the world, are very, very angry with the singer. You would think that a free ticket around the world, free tickets to the singer’s concerts and drinking expensive champagne during every flight would cheer them up, but no – they’re still in a tight mood.

According to new reports, who were actually present during the flights, Rihanna made an effort to come and say hello to everyone on Wednesday when they took off from Los Angeles to Mexico City, but after that, she decided to do her own thing and sit by herself in first class.

It’s understandable, considering that the Bajan starlet would be extremely tired after performing a show. Take into consideration that after a show, she’s on the plane going to her next destination, before doing a couple of rehearsals… and this would go on for seven days. Luckily for the moaning people, they will be heading back home tomorrow, but that gave them enough time to hit up their websites and blogs to complain about their journey with Rihanna.

“They told us it was going to be exclusive with not that many people,” one fan told a tabloid magazine. “We were gonna go to soundchecks and be front row.” Another continued: “We’ve spent days waiting for her on the Tarmac to get on planes or waiting in coaches for hours on end. There’s more waiting when we arrive in each city too, lugging cases off buses to hotels then straight out again.”