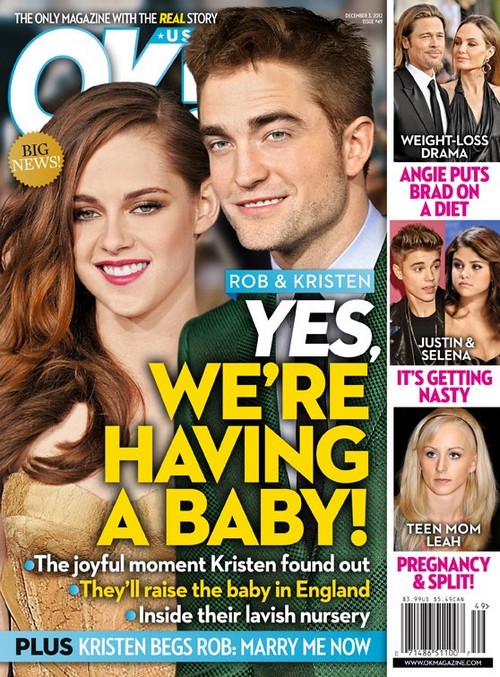 Well, nothing helps put pressure on a tricky reconciliation quite like a surprise and maybe intentional pregnancy!  We all know that Kristen Stewart royally screwed up her storybook-ish romance with Robert Pattinson by hooking up with the very married Rupert sanders. That’s old news. For whatever reason Rob seems to have had a really hard time cutting ties and making a clean break from Kristen, in spite of her “momentary indiscretion”.  I’m not sure how, but the sour puss seems to have a serious hold on the popular actor.

The duo has been working on a reconciliation since September and now rumor has it that Kristen is in fact pregnant! The latest issue of OK magazine has all the details on the surprise pregnancy and the couple is said to be thrilled with the news. Supposedly this has helped Rob to let go of his cheating girlfriends’ devious ways and decide to wipe the slate and start completely over with her. Supposedly they’ll raise their baby in England, perhaps because it’s easier for Kristen to live with herself and her bad behavior outside of LA. She’s also putting the wedding pressure on Rob.

Every issue has to contain some Teen Mom news and this week they’re talking about Leah Messer.  You know, the divorced twenty-year old with twins?  Well, she’s on marriage number two while carrying baby number three and apparently her old demons are affecting her relationship with her new husband, Jeremy Calvert.  Leah likes to be married but tends to have a hard time keeping her clothes on in spite of the vows so there are always trust issues.

Did you know that Angelina Jolie has put Brad Pitt on a diet? You’ll have to grab the latest issue to find out more about her demands before they tie the knot!