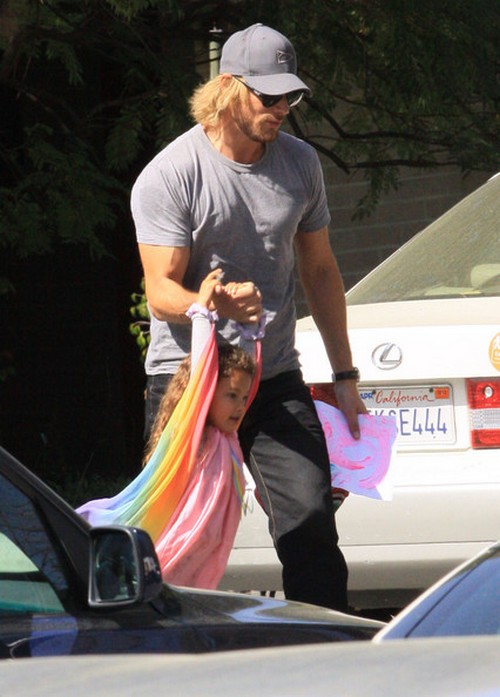 A huge knock out drag out fight went down at Halle Berry’s house this morning.  Halle’s ex Gabriel got into a vicious fight with Halle’s current man Olivier Martinez.  There has been a lot of tension between the three since Halle lost her bid to take Halle and Gabriel’s daughter Nahla Aubry to France.

Halle recently lost  in court when a judge ruled she could not permanently move their 4-year-old daughter to France.  The reason Halle gave the judge she wanted to move to France, was the paparazzi situation in LA.  She claimed the paparzzie in LA were dangerous.  The judge was not buying it and denied her request.

TMZ has the scoop on the story:  “Gabriel Aubry was arrested after a huge fight broke out at Halle Berry‘s involving Gabriel and Olivier Martinez — both men were injured, Gabriel is in the hospital and was arrested for battery … law enforcement sources tell TMZ.  The incident happened this morning when Gabriel was dropping Nahla off at Halle’s house. Halle was present as were other witnesses when the fight erupted.”

Witnesses claim that Gabriel went nuts and started fighting with Olivier.   Apparently when Gabriel got to the house Olivier made a remark about how they have to move on and Gabriel got upset.  It seems a pretty extreme reaction to the comment.   Since the two were speaking French and the bystanders were probably not able to understand the conversation, I believe there is more to this situation that meets the eye.

Meanwhile, Halle has managed to get a protective order that keeps Gabriel away from her, Oliver and Nahla.

Sounds a little to convenient for my liking.  What do you think, hit the comments and let us know!