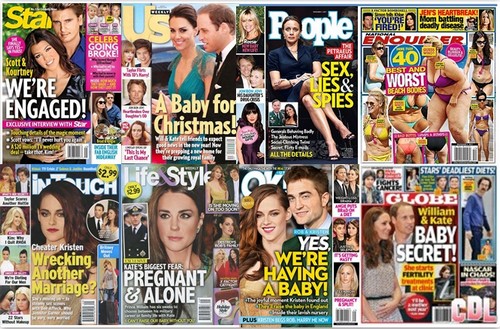 The Tabs  this week are all about Kate Middleton, Prince William and Kristen Stewart and Robert Pattinson.  Kate is pregnant again, this is about the 100th time this year.  Kristen Stewart is being a bad girl, what’s new?  Enjoy the tabs!

The cover of this week’s GLOBE reveals the previously hidden baby secret of Kate Middleton and Prince William – Kate is getting royal fertility treatments!  Kate has been trying to get pregnant for a while now without any success but Queen Elizabeth’s promise to make William King has made producing a royal heir top priority.  GLOBE revealed recently that Queen Elizabeth has decided that Kate and Will should ascend the throne rather than discredited Prince Charles and despised Camilla Parker-Bowles.

The December 3, 21012 issue of OK! MAGZINE has on the cover details on Rob and Kristen’s plans for their new family-to-be. They say the couple is likely to raise the baby in England and Kristen is now begging for a quickie wedding this winter. Kristen doesn’t want to have the baby before she is married.  Who knew the Trampire was so conventional? Twilight fans must be thrilled to hear of these new developments!

The latest cover of IN TOUCH weekly shows the splendid and maudlin face of Kristen Stewart, with a tagline that reads, “Cheater Kristen Wrecking Another Marriage”.  In Touch reveals in the latest issue why Kristen is (once again) wrecking another home, but this time around it isn’t Rupert Sanders, it’s another director who goes by the name of Ben Affleck.

The latest issue of PEOPLE magazine, December 3rd, 2012, sinks its claws in the headline story of the year, the General David Petraeus affair. Paula Broadwell, the mistress in this sordid tale, is plastered all over the front page ala Sharon Stone in Basic Instinct. The headline reads, “The Petraeus Affair: Sex, Lies & Spies.”

The biggest story on the cover of LIFE & STYLE – obviously – the Royal couple. Pregnancy rumors have been swirling around for ages, but it seems they could finally be true. With the Prince making moves to leave the RAF to take up more royal duties, and Kate-Watchers speculating on a possible weight gain, my Christmas wish may come early this year! According to Life&Style, William has 6 weeks to choose between the military or his family- and Kate’s worried that this decision might mean an absent baby-daddy. I sure hope not, do the right thing Wills!

On the cover of the latest STAR magazine, there’s an in-depth report on celebrities going broke. Now, you’re most probably asking yourself, “How can a celebrity go broke if they have millions?” Well, let us assure you dear reader, the more money you have, the easier you’ll go broke. It happens to celebrities every day. They spend their hard earned cash on luxuries, but fail to pay taxes.

“A Baby for Christmas” is such a vague term by US Magazine. Does Santa just decide one random morning, “Oh, they were so naughty! Let’s deliver them a screaming, vomiting heir!”? According to the latest cover of Us Weekly, Prince William and his wife, the Duchess of Cambridge Kate Middleton, will be announcing their pregnancy in December.

That’s it,  another week in the tabs over!