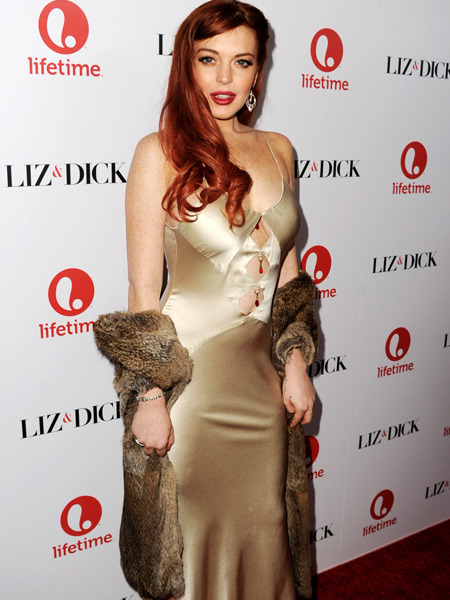 Lindsay Lohan is seriously hilarious. The actress has said that she plans to work on more movies in hopes that she can win an Oscar before she tries to settle down with someone and find true love. In our opinion, Lohan is getting too big-headed just because she starred as Elizabeth Taylor in Lifetime’s Liz & Dick, which received bad reviews from critics, calling the movie “a joke”. Definitely won’t be receiving an Oscar from that film then, is she? Ha.

Anyway, keeping in mind that she easily gets distracted with family drama: finding out she has a half sister she never knew about, fighting with her mother Dina Lohan in a limousine while she (Dina) was supposedly taking cocaine before ranting in a phone call to her dad that her mother wouldn’t return the money Lindsay had given her to cover some of her bills for their home in New Jersey, to name a few. It’s all just one big mess, and in all honesty, had she made a movie about her life, starring her over dramatic family, it would most likely win an Academy award itself.

Asked about her love life during the Liz & Dick premiere, the actress says: “I’m not focused on that yet,” Lohan commented. “I want to do a ton of movies first. After I win an Oscar, I can start thinking about love. I want to adopt a son. I don’t want to deal with a mini-me,” Lohan added. The star continued about being in the spotlight all the time: “Since I was a kid, I’ve loved being on camera. Don’t misconstrue that – I didn’t strive to have flashbulbs at dinner or people who don’t know me calling TMZ. And 99% of the time, it’s not true. I feel bullied.”

Well.. we wish you good luck on that Oscar you are hoping to get.