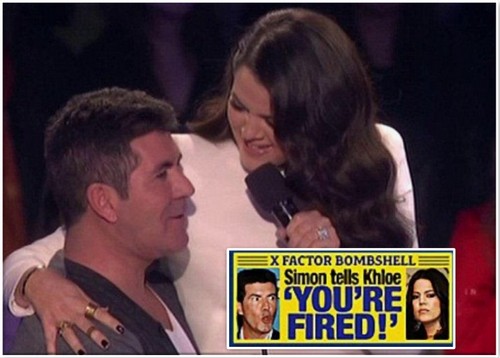 At least according to the National Enquirer.  In a bombshell report NE is claiming that Simon has given Khloe the old heave ho.  No surprise there right?  Saying Khloe is horrible on the show is an understatement.   She is awkward, tacky, vulgar and  shouts into the mike. Compared to hosting pro Mario Lopez she looks totally out of place.

Add to this, she has somehow gotten it in her head that if she shamelessly flirts with Simon she will keep her job. On last night’s X Factor Top 1o Live show, she sat on Simon’s lap and said, “I was told by Mr Seacrest that if I sit on your lap it would make you very excited,’  as she plunked herself onto Simon lap. Can anyone say classless?? barf….

The Kardashians are known for their crass tackiness and Khloe is keeping the reputation alive with her antics.

X Factor viewers are complaining loudly and the show’s ratings have gone down significantly after Khloe debuted.  Everyone agrees she was a HUGE mistake by Simon.

What do you think, should Simon cut his losses and fire Khloe?  Hit the comments and let us know your thoughts.