Ben Affleck and Jennifer Garner’s Marriage On The Rocks 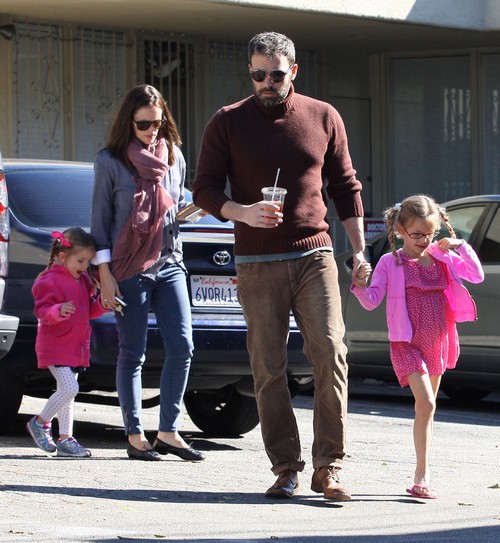 Oh no.  It looks like yet another of Hollywood’s leading powerhouse couples has hit a pretty rough patch lately. Ben Affleck and Jennifer Garner are often photographed together out with their three kids and they appear to be such a happy, fairly normal (or as normal as celebs can get) family.  Jen does an occasional film here and there but truly has opted to give up a great acting career in order to be with her babies while Ben brings home the bacon. It’s an arrangement that seems to have worked pretty well, at least until their son was born a few months ago. Three little kids is rough to wrangle, especially when you’re husband is either away shooting or promoting his work.

According to Showbizspy, Ben is really hoping that his latest film, Argo will win an Oscar and apparently his career goals have become pretty obsessive, leaving Jen and the kids in the dust. Their time apart has increased and it is wreaking havoc on their marriage.

“Ben really wants to win an Oscar for this film, and he’s become pretty obsessive about it.  While Jen is trying to be supportive, friends say they aren’t sure how much longer she’ll be able – or willing – to juggle the kids and her career without Ben’s help. Is he does win that Oscar, he’d better thank Jen first!”

It sounds like Ben better wake up fast or else instead of living her day to day life like a single mother, Jen may just go ahead and choose to actually be one!  Do you think that Ben will realize the damage that all of the distance is doing to his relationship, or is he so fixated on work that he doesn’t even get it? Tell us your thoughts on the state of Ben and Jen in the comments below!