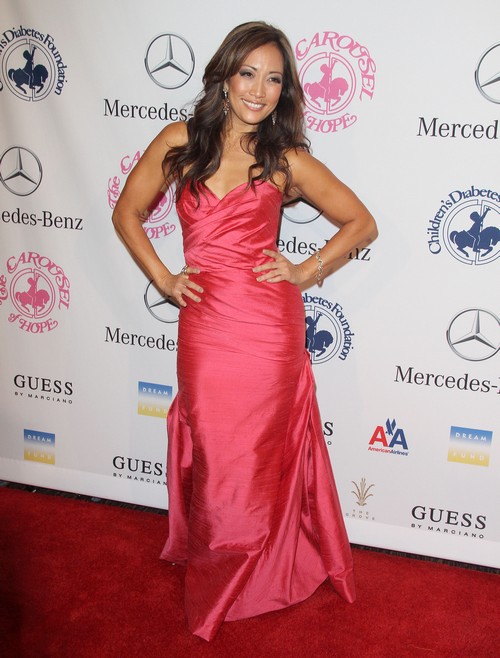 All is not a bed of roses on the Dancing With The Stars set.  Judge Carrie Ann Inaba has her knickers in a twist against fellow judges Len Goodman and Bruno Tonioli.  It has gotten so bad that Carrie Ann is not speaking to either Bruno or Len.

Rumor has it that the three judges decided to be a little more stingy with their comments on this seasons DWTS All-Stars. If you have been watching this season, you must have noticed that Carrie Ann is certainly a little more contentious with the contestants.  However Bruno and Len have not followed suit.  Carrie Ann is totally pissed off, she has told them she is disgusted.  She feels they are looking like, “cuddly puppies.”  She believes they should be more critical.

The National Enquirer reports, “Carrie Ann thinks they’ve been wimping out because Bruno is doing his usual cheerleadering and , if anything, Len is trying to soften his image.  She’s disgusted and has told them behind the scenes, leaving the three pointing fingers at one another and no longer speaking backstage.  The producers just hope they can make it to the end without one of them walking out – it’s gotten that bad!”

Add to all of this Carrie Ann is not pleased that the powers that be have had Paula Abdul on the show this season. Carrie Ann, who has been part of the ABC reality dancing competition show since 2005, doesn’t want to share camera time with the extremely popular former judge of American Idol and the X Factor.   “She thinks Paula’s a tremendous scene-stealer,” revealed a show insider. “Carrie Ann loves being the only female judge, and she’s suddenly looking at Paula as competition, even though Paula’s gig is temporary.”

Carrie Ann is totally paranoid her fellow judges have let her down and are not being more serious.  The result is she is looking like the bad guy.  She fears the powers that be at DWTS might just feel it is time to add another female judge to the judging panel and who better than Paula Abdul?

What do you think, have you noticed a change in Carrie Ann this season?  Would you like to see Paula added to the cast?  Hit the comments and let us know your thoughts!