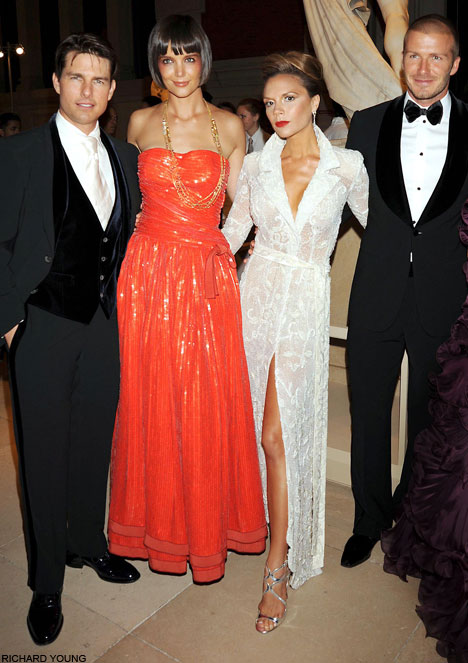 Katie Holmes wants her old friend Victoria Beckham back, it has been reported. The actress, who has been going through a lot these past few months after filing to divorce Tom Cruise, supposedly would have loved to have her friend Victoria Beckham around her and support her. The two became best friends after the Beckhams moved out from London to Los Angeles in 2007 after David Beckham signed a deal with the LA Galaxy team.

“[She] is short of female friends and really misses the time she used to spend with Victoria,” the insider said. “She knows she’s incredibly busy,” the source added. “But she’s pushing for them to spend quality time together when Posh is next in New York.”

We recently reported how Katie planned on upstaging Victoria as they both launched their clothing lines in New York and only one could come out on top. Neither of the two went to greet each other or try and plan something together which made it clear that these two were no longer the best of friends they claimed to be a couple of years ago.

An insider had revealed: “Katie is definitely hoping to upstage Victoria.  This is her first show and she’s determined to prove that she can pull it off.“

Only time will tell if these two will ever be friends again, but it looks like Victoria has too much going on to focus on the past. Her new range of her clothing line ‘Victoria Beckham’ was voted one of the best designs of the year, which certainly would have made Katie jealous, and we doubt Holmes ever even congratulated Vic on baby Harper.