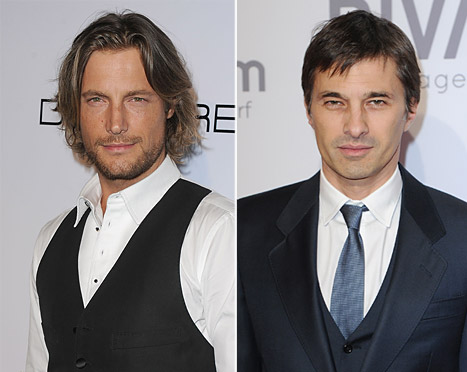 There was little to be thankful about at Halle Berry‘s house this Thanksgiving, because the two men in her life were fighting like crazy, testosterone-filled French men. I say that because they’re both French (Gabriel Aubry is from Quebec, and Olivier Martinez is from France), male, and crazy. Halle and fiance Olivier have been trying to get custody of her daughter Nahla (fathered by Gabriel) so they can move to Paris. Instead, a judge granted 50/50 custody, and team Halle has been fuming ever since.

Gabriel claims that Olivier approached him last week while at Nahla’s school for a play. He claims Olivier whispered to him in French, , “I wish I could beat the shit out of you right now. You’re lucking we’re in a school right now. We’re going to take Nahla right now and you’re not going to follow us.” The next day, Gabriel dropped Nahla off at Halle’s house for Thanksgiving and was unexpectedly approached by Olivier. He claims Olivier knocked him off the porch stairs and began beating him. Photos show Gabriel sporting cuts, bruises, and a hugely swollen black eye. Olivier has reported a hand injury.

I’m no doctor, but this doesn’t seem like rocket science. One has a hand injury, one has a face injury. Who hit whom, I wonder! A judge issued emergency protective order, so Gabriel has to stay 100 yards away from Halle, Olivier, and his own daughter Nahla. Then, today, Gabriel was issued a restraining order against Olivier. I expect this will have a huge affect on the ongoing custody battle for Nahla, because no judge wants to put a child in a home with violence.

We hope that Halle isn’t hurting her daughter by defending her fiance. Her camp has claimed that Gabriel threw the first punch, and Olivier had no choice but to defend himself. Of course, watching your dad get beat up can’t be healthy for a kid, and Nahla is probably feeling really confused about this all. We hope everyone stays safe and that justice is served!