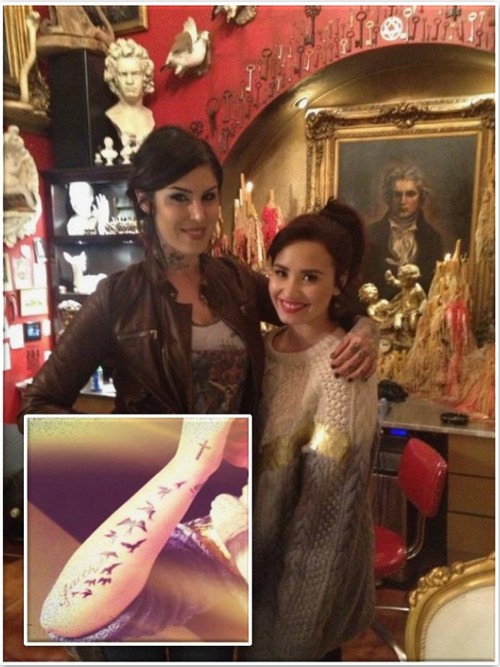 Demi Lovato’s Viking eyebrows have been the most exciting contestants on X-Factor USA thus far. The teenage judge adorns the tinted horror brows made in Elvis land on a weekly basis, with or without the cacophonous laughter and tsk-tsk-tsking of home audiences. We’re as much for femininity as the next guy, but the eye-popping leeches on her forehead don’t bode well for her apparent beauty. The singer has also been less than stellar on the reality television talent show with her poor contestant song choices, acerbic Simon Cowellisms, and blissful ignorance. Several of her contestants have already been gunned down by the audience, and several more will follow in their wake. (Perhaps the teen star should stop tinting her eyebrows, and focus instead on the lives and careers of her young adults).

Lovato is not only obsessed with crafting furry creatures on her forehead, she’s also obsessed with pretty tattoos. The X-Factor mentor from hell recently obtained a brand new tattoo on her arm from the most famous tattoo artist in the world, Kat Von D. This tattoo, her largest piece thus far, depicts a flock of birds flying around the word “faith” on her upper arm. The singer tweeted Kat Von D shortly after the new ink was presented to the world on Instagram. She wrote, “Thank you so much @thekatvond for my new ink! I think it’s beautiful and I love it!”

Her new tattoo is one of 13 philosophical symbols on her body. She has “Stay Strong” on her wrists, “Let Go & Let God” on her feet, and “you make me beautiful” on her ribs. There’s also a tattoo of a cross on her hand and the words “peace” and “rock n roll” on her fingers.

We just hope those leech eyebrows won’t be as permanent as her appealing tattoo collection.