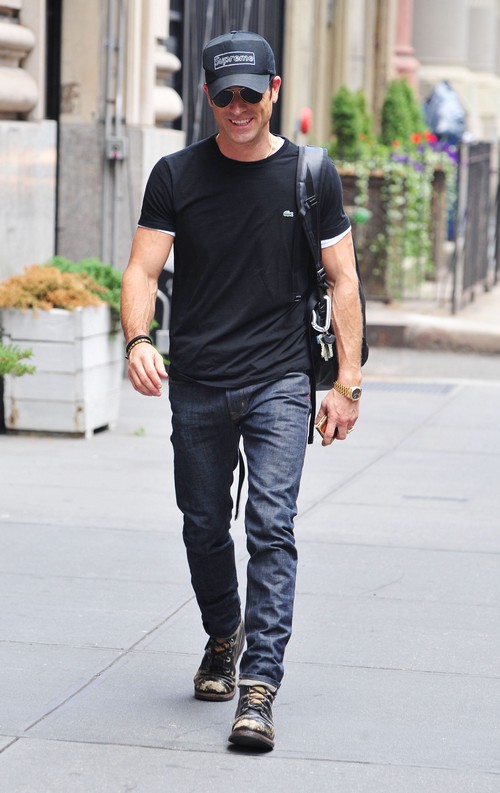 Justin Theroux, the chiseled fiancé of Jennifer Aniston, spends a tiny African country’s food bill on jeans. According to the National Enquirer, Theroux spends $1100 on jeans in order for him to look at his best when photographed alongside his moronic woman candy. Theroux reportedly likes to wear rocker/biker jeans by high-end boutique designer Balmain. His closet is full of it, literally and figuratively.

A source told the magazine, “Justin loves clothes. And he knows that when you’re standing next to Jen Aniston, you have to look really cool. So he buys Balmain, which ain’t cheap! Sure it’s an astounding price to pay for jeans, but hey – he’s marrying Jennifer Aniston.”

Let’s break it down for you, shall we? A regular pair of jeans will cost you about $30, so divide $1100 by $30 and you get 36.6 jeans – that’s an entire wardrobe for a below-the-breadline family. In fact, that’s more jeans than an average wardrobe on a film set.

Unfortunately, this is not the only extravagance in their lives. According to latest reports, Aniston is planning to spread her wedding out over three days. A source alleges, “What started out as quite low-key is now looking more extravagant. They are still keen on a beach wedding in Hawaii or Mexico towards the end of the year, but Jen wants it to be more like a massive party and, at the moment, it looks like it could stretch over three days. Half of Hollywood will be there too. The dress is being kept top secret. But now Jen’s debuted this massive ring, it’s kind of set a precedent so who knows, we could see Jen break from her conservative, simple style and go for a show-stopper of a dress too.”

What do you think? Do you think Theroux spends a ludicrous amount of money on jeans? Do you think their wedding will be the event of the year? Let us know your thoughts in the comments below.