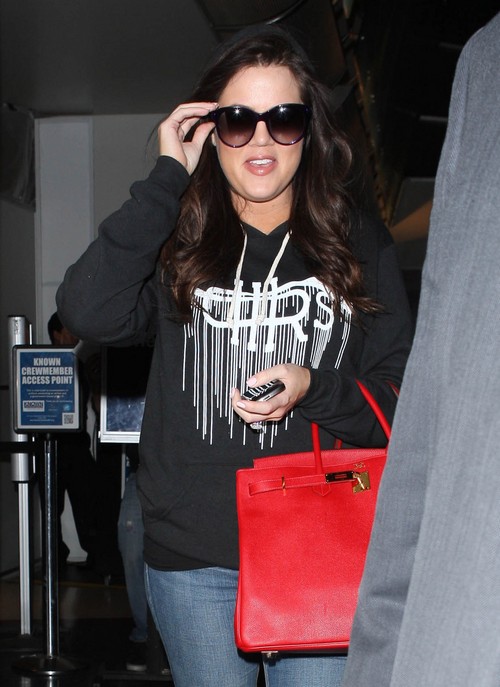 The Khloe Kardashian horror should be kicked off X-Factor USA for her tedious and disjointed delivery of lines. The new co-host, appointed by Simon Cowell mere days before the live shows, is finding herself in hot water with her music mogul boss. In 2007, Khloe was arrested for DUI, and in 2008, Khloe was busted again for a probation violation. If she makes these mistakes again, it’s goodbye Khloe and hello unemployment!

According to a source, “Simon has a ‘no tolerance’ policy for drinking and driving. When Khloe joined the show, someone on the cast joked about getting a drink to welcome her, and that’s when Simon took the opportunity to lay down the law and reiterate his strict rule. He took Khloe aside and said, ‘If I ever see or hear that you’ve gotten behind the wheel of a car and you’ve been drinking, or, God forbid, you get another DUI, there will be no questions asked — consider yourself fired!’”

Uh-oh! Grab onto your hats America, because a storm is brewing on the horizon. The source added, “Simon warned her from day one that she needs to give 100 percent to the X Factor. He told her, ‘This isn’t the Kardashian show. This is MY show, and it’s important to remember that it’s serious business.’”

Unfortunately, one doesn’t tell a Kardashian off for being a moronic, drunken fool. “Khloe got a bit defensive and smarted off, telling him she thought he wanted her to be the ‘wild card Kardashian’ — and that’s when he laid into her again. Simon said, ‘I want you to be edgy but to use some common sense. I don’t want to hear that you’re out drunk and making a fool out of yourself, me or the show!,’” the source explained.

Khloe’s position is already in danger for the third season of the ultra-popular reality television show. Her poor performances cannot, under any circumstances, bode well with the producers and/or Simon. However, the source alleges, “Simon wouldn’t have hired Khloe if he didn’t think she could do the job. He knows she has a huge fan base and will draw in viewers, but he has to protect the show. There would be a tremendous backlash if she were popped for another DUI.”

Simon fails to understand that Khloe’s weekly mumbling and pointy nipples have already caused a “tremendous backlash.” Fans of the show fail to connect with Khloe, and the dwindling viewership figures are clearly a symptom of this general disconnect. Perhaps it would be in the show’s best interest if Khloe is INDEED arrested for another DUI? Let us know your thoughts in the comments below.