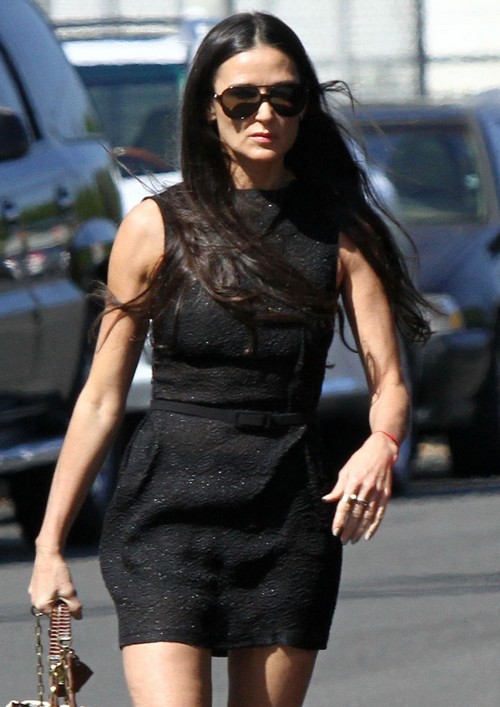 It’s pretty sad when even your grown daughters are starting to intervene and beg you to cut the cord with your ex husband and that is exactly what is going on in Demi Moore’s life right now. This woman has been driving the crazy train for the last year between heading off to rehab and then playing the role of the woman scorned she has made it a full time job to be Ashton Kutcher‘s jilted ex-wife. Now it sounds like Rumer, Scout and Tallulah Willis are all jumping on the get-over-Ashton bandwagon, like everyone else the aging actress knows. According to Radar Online,

“Demi just can’t let go of Ashton despite him obviously moving on from her, and her daughters don’t think it’s healthy or helpful for her All three girls want her to divorce Ashton and stop talking about him, they think that she needs to focus on the future and quit worrying about what he is doing. Demi refuses to let it go, and her daughters are trying everything they can to get through to her that things are over with Ashton.”

It has to be rough having such an unstable, immature mother. These girls must feel like they parent her rather than it being the other way around. It’s no secret that Demi has resorted to drastic measures, such as freezing her face, in order to appear younger and she has been obsessed with her diet and plastic surgery for years now. I don’t understand why this chick thinks that turning into a reproduction of her younger self will bag a decent guy. If everything about her appears fake, how on earth can she demand someone be real with her?

Obviously the split from Ashton just pushed all of Demi’s insecure buttons at once and now even her daughters are trying to intervene. Will they get through to their mom or will she continue obsessing over her failed marriage? Dragging out a divorce never wins the guy back, it only makes him resent being with you in the first place! Tell us your thoughts in the comments below!