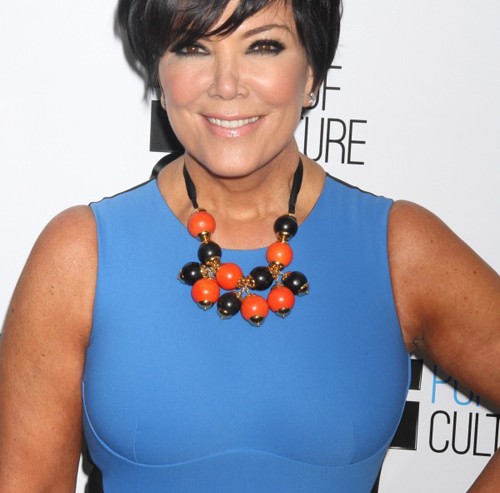 Yikes! Kris Jenner thinks every woman needs a boob job every twenty years to look good. The momager of six children hasn’t been shy about going under the knife, admitting to having her breasts done twice, before unveiling her newly formed tight neck on a previous episode of Keeping Up with the Kardashians. So it only made sense for Kris to encourage women to get their breasts done every twenty years to look good, not only for them but for their husbands too, of course.

Jenner took time out of her busy schedule to comment on her new boobs which she had done over the summer after she became very upset with their appearance. She tells VH1’s Big Morning Buzz Live:

Meanwhile, recent reports claimed Bruce Jenner was tired of Kris cheating on him and had told her he would be filing to divorce her after meeting up with his lawyer, trying to make sure she doesn’t get a penny of his $100 million net worth. However, Kris has denied these reports, saying that the two are happier than ever and when she read the stories about Bruce filing to divorce her, they laughed it off together:

“I said, ‘Honey, I think we’re getting a divorce’. He said, ‘Honey, don’t bug me with this. I’m at the hobby store buying helicopter parts’. “We just laugh it off,” she said. “We love each other and just laugh about it… These kind of stories have been circulating for the last couple of years.

“We’re absolutely not filing for divorce. Everything is great. We feel very blessed as a family.”