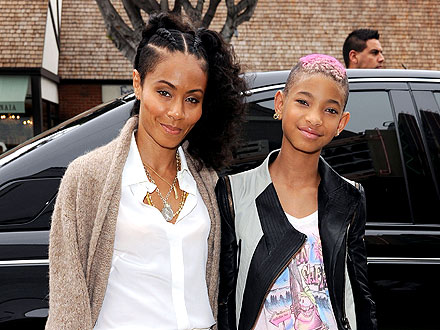 We actually got a little teary-eyed reading what Jada Pinkett Smith had to say about her daughter Willow Smith deciding to shave her hair off. It’s been questioned a lot whether Will Smith and Jada were responsible children, seeing how much freedom the children get and of course when Willow cut her hair, a lot of people started to wonder if the 11-year old was having a meltdown because she hadn’t been guided well by her parents who are desperate for their kids to be famous like them, according to reports.

While Willow dyes her hair constantly now that she has a short-hair look, her mom has taken to her official Facebook page to let people know that she is a good parent, and not only that, she also wants to let parents know that their children are their own individuals and shouldn’t be controlled to an extend that the child isn’t allowed to make their own decision, which she believes could have an impact on them through adulthood.

She wrote on her Facebook page: “The question why I would LET Willow cut her hair,” she wrote. “First the LET must be challenged.This is a world where women, girls are constantly reminded that they don’t belong to themselves; that their bodies are not their own, nor their power or self determination.”

She added that her promise to let her children to be their own individual so that they can understand that they are their own domain. “I made a promise to endow my little girl with the power to always know that her body, spirit and her mind are HER domain. Willow cut her hair because her beauty, her value, her worth is not measured by the length of her hair.”

Jada is definitely educated and knows what she’s talking about.