Miley Cyrus Supports Angus T Jones Rant Against Two And A Half Men, “Respects His Beliefs” 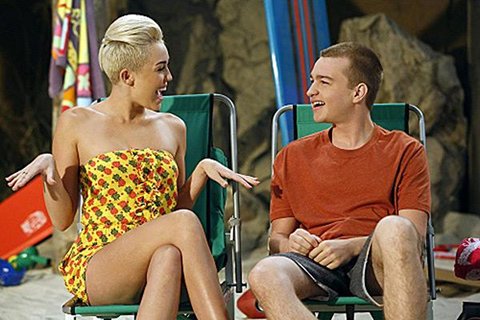 Angus T Jones has at least one friend on the set of Two and a Half Men, and lucky for him it’s one of the most influential people in the world! Ex Disney star Miley Cyrus knows all about how TV can ruin your life–remember when her dad Billy Ray Cyrus said Disney broke their family and turned her into a spoiled whore?–and is offering her support while Angus serves the rest of his sentence–contract–on the hit show.

Yesterday a Christian group released video footage of the 19-year-old star ranting about how evil the show was. Despite making $350,000 per epidsode, he wants people to educate themselves about the terrible things TV causes, and to stop watching the show immediately! Miley has done a 180 since leaving Disney, and seems to be doing really well (in an edgy, I-don’t-care-what-you-think-but-I-love-adopting-sort-of-way), but obviously made the decision to guest star on the show that Angus is calling disgusting filth. Hard not to take it personally, but Miley is doing great! A friend of Miley reported her feelings on the show.

“Miley was shocked just like everyone else who saw the video. But Miley doesn’t judge anyone and she of course wants Angus and everyone who works on the show to be happy and continue doing the show because she’s a huge fan and she likes guest appearing. She had the time of her life when she worked with Angus and she even thinks he’s hot and incredibly sweet. She even had fun hanging on set and filming with Ashton and Jon. I know she’s sure things will work themselves out between everyone involved. She loves Angus and adores his character on the show. She also respects his beliefs and is sure that Angus will make the best choice for his life. Everything will be fine at that show, they all get along well.”

Well we just love that Miley is so cool and supportive. If Angus thinks working for the show isn’t healthy for him, than it’s his right to leave (after his contract runs out)! A few years ago we could have pictured Miley going crazy and being super offended and reacting with an overly assertive lap dance or bong hit, but now she is all class! What do you make of this crazy stuff?