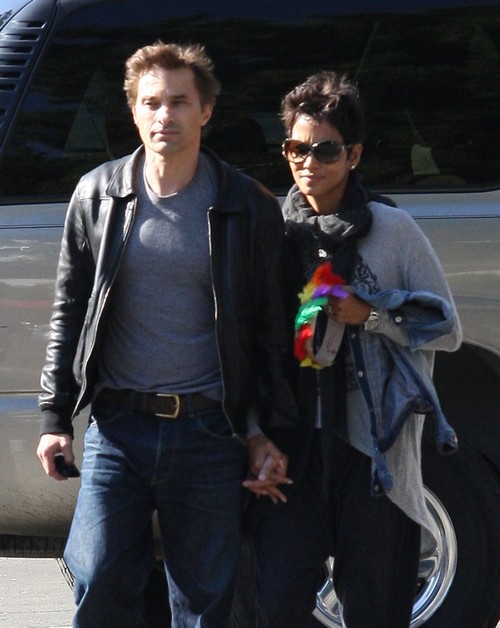 Halle Berry and her ex husband/baby daddy Gabriel Aubry have had a trying few months, filled with custody battles, mean tabloid rumors, and, most recently, a bloody holiday fight on her front lawn! Halle, her fiance Olivier Martinez, and her daughter Nahla were granted an emergency protection order after Olivier reported that Gabriel attacked him without warning. Then Gabriel was granted a restraining order against Olivier. We’ve been speculating about how this will affect their ongoing custody battle–Halle and Olivier are desperate to win custody from Gabriel so they can move to France full time.

We thought there would be a drawn out and messy battle in court, but it looks like their lawyers are meeting today to avoid the media circus! TMZ reported, “Blair Berk, Shawn Holley and other lawyers spent hours yesterday trying to resolve the differences that led to the explosion of anger in Halle’s driveway.” Today, the lawyers appeared without their clients in court, which means no extensions of restraining orders are possible, because a witness must be present to testify why it is necessary.

Blair Berk, who is one of the lawyers representing Halle Berry, released this statement today: “The parties have reached an amicable agreement. there will be no further statements at this time.” Translation? “We’ve given up hope that any sane judge will give Halle and Olivier custody of Nahal after Olivier’s violent behavior to the child’s father. We say ‘amicable’ to make it sound like there are no hurt feelings, but if Halle could, she would shove one of her stilettos through his neck. Everyone hates Halle for staying with Olivier after he made death threats, so she’s trying to seem like a nice mom who is really caring and unselfish.” Obvoiusly, we remain unconvinced.

And don’t for a second think this is over! Gabriel Aubry was brutally attacked by Olivier and has plenty of evidence to prevent Nahla from being around the French actor. Halle may be putting her own happiness ahead of her daughters safety, but Gabriel and his lawyers know how to use this violent assault to ensure Nahla’s wellbeing.