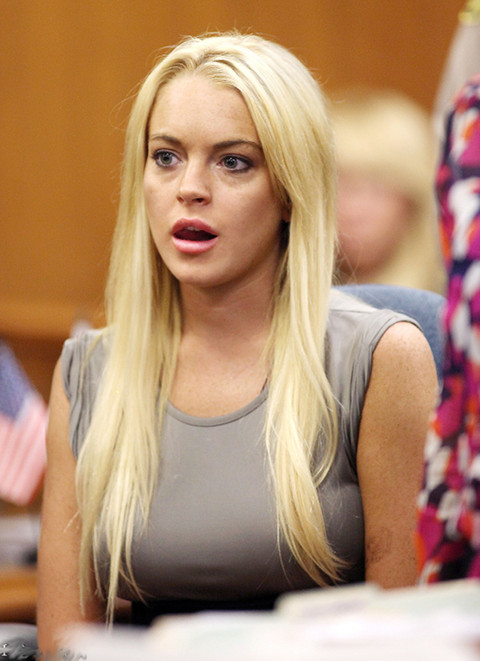 Watching Lindsay Lohan‘s life unfold is more painful than watching her act in any movie made after 2005. It would be funny if it weren’t so disgusting and tragic! Yesterday we reported that Lifetime was waiting for the DA to file charges after Lindsay lied to police after a car accident in a rented Porsche while filming Liz & Dick. Her contract with Lifetime stated she couldn’t be transported by anyone other than her studio appointed driver. This morning we reported that Lindsay was charged with third-degree assault after punching a woman in NYC. This morning the DA in Los Angeles filed charges against Lindsay for her car accident this summer, and she is on a yellow brick road straight to jail!

The 26-year old substance abuser was charged with providing false information to authorities, reckless driving, and obstructing or resisting a police officer. Translation? Another court date, another orange jumpsuit! A friend recently spoke out about the negative response to Liz & Dick. “Lindsay hoped this movie would be her comeback. Instead, it looks like it’s going to make her a punch line again, and that’s not good. After this, the only roles that producers will be calling her to play are ‘Lindsay Lohan, Hol­lywood train wreck’ types – and that’s the last thing she wanted. This could put her in a really bad place [emotionally].”

You know what else puts you in a really bad place? Punching people, lying to cops, breaking contracts, and driving into other cars! Considering the legal melange she’s facing, critical reviews of a crappy Lifetime docudrama should be the least of her worries! But Linds is all about maintaining her reputation, and still seems to think she can buy her way out of any serious trouble! Are you ready for the Lindsay saga of endangering the public to end, or are you hooked on following her crazy path of destruction?