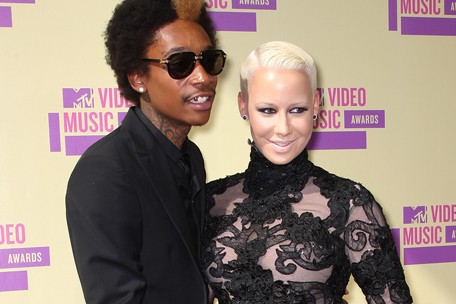 Wiz Khalifa is finally becoming a man. He’s already made the first step by announcing he’s going to be a father very soon as his girlfriend Amber Rose is expecting her first child — and it’s a boy. Now, it seems that the rapper and Amber are planning to marry, but surely after she has given birth — nobody wants to pop out of their wedding dress on their big day, do they?! Ha.

Speaking to Hot 97, the rapper reveals that he’s planning to get a marriage license in a couple of weeks and then making an official date for the wedding AFTER Amber has given birth because she wouldn’t want to miss out on getting drunk at the after party (his words, not ours).  “We’re going to get, like, licensed marriage – yeah, like in a couple of weeks we’ll have that done,” he said.

“You just sign the papers or whatever and it’s like a legal thing – it’s like, ‘Bam, you’re married’. When you have the ceremony, that’s when you invite the family, [Rose] could fit into a dress, and then like, you know, nieces, nephews. If we have a daughter one day she might want to give the dress to her daughter, but if she’s pregnant she can’t do that… [And Rose] wants to get drunk, you know what I mean?”

Wiz and Amber have been dating since early 2011, after ending her relationship to Kanye West due to his “constant cheating,” supposedly with Kim Kardashian at the time.