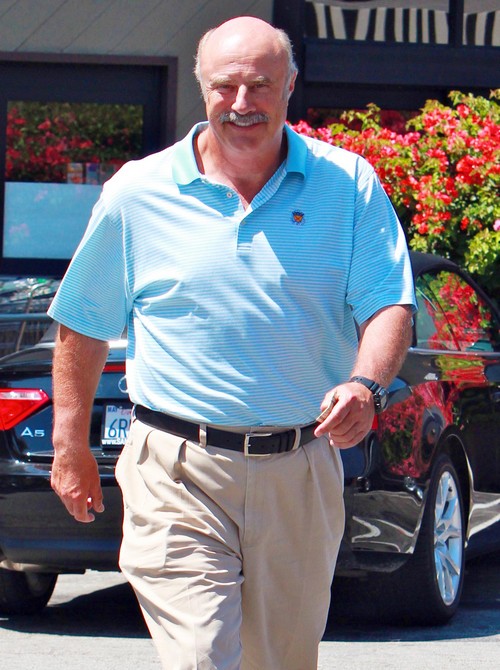 Things are rarely what they seem to be and that often can be said of people as well. Especially celebrities that are in a position to exercise some type of control over others. On television Dr. Phil McGraw seems to really want to help people and sometimes that can require being a bit tough on them. The problem, according to insiders is that the nice version of Phil only appears in front of the camera. The rest of the time he walks around acting like a dictator, barking orders at his staff and bullying guests. According to the latest issue of The National Enquirer, even his wife Robin sits in the back cowering in fear, rather than stand up to her husband.

“He’s like a fascist dictator on a set of quivering female servants, “the insider revealed. “I can feel the fear on the set. There seems to be a reason he hires a nearly all female staff…he seeks out the vulnerable type of person that’s reliant on their paycheck from him so they don’t fight back. Guests often seize up once they get in front of Dr. Phil because he’s so intimidating. He’s NOTHING off camera like he appears on camera. Before he gets to the sound bite he’s looking for there’s no sense of a gentle, sympathetic, professional view. It’s all about the sound bite, and he’ll bully the guest off-camera until he gets the sound bite he needs.”

Insiders also say that Phil’s huge ego is at the root of the problems on the set of his talk show. His narcissism is causing him to appear emotionless and he completely ignores the needs of those around him. Frankly I don’t find any of this to be too surprising. He has always struck me as a powder keg that could explode at any minute. I just have to wonder why it is that his wife has chosen to stay with such a difficult man. It sounds like she most definitely doesn’t approve of his tactics!
Do you think this report is true and that Phil is totally out of control off-camera? Tell us your thoughts in the comments below!