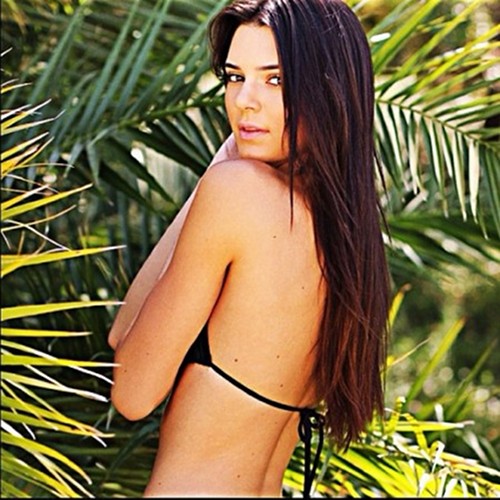 I know that Kris Jenner is a worse version of Dr. Frankenstein (and lacks all literary merit to boot), but don’t these girls have a single positive influence in their lives? Kendall Jenner has just joined the ranks of Kourtney Kardashian, who took sex pictures with her boyfriend while she was a minor (which the FBI calls “possession of child pornography”), Kim Kardashian has dozens of sex tapes out there waiting join the fame of her Ray J hit, and Khloe Kardashian is flashing viewers of The X Factor every chance she gets. In fact, it’s a wonder that 17-year-old Kendall Jenner held out for as long as she did!

The Miss Vogue covergirl/high school drop out treated her Twitter followers today by posting a topless picture with a Kardashian motto written across that reads, “Keep it classy, never trashy, just a lil’ nasty.” The photo is a composite of four grainy sepia toned pictures of Marilyn Monroe in various stages of toplessness–covering up with a small towel, or perhaps very large roses? It’s hard to tell! We hoped that Bruce Jenner’s fatherly concern would help his youngest daughters keep their clothes on, but apparently momager Kris Jenner has taken the reigns and is driving her daughters down the path that leads to fleeting famewhore success followed by an untimely death brought on by a deadly concoction of over the counter medication, vodka, and self loathing. 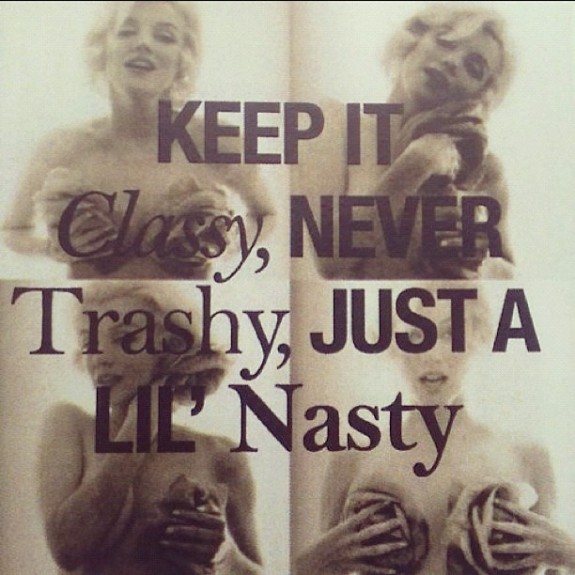 Kendall recently talked about her dream of writing children’s books and becoming a fashion designer, but apparently the basic math and literacy was beyond her. She’s chosen to take the shortcut path by riding on her half-sister’s fame, dressed in nothing but a see through skirt with an arm across her chest. I would find it a little more palatable if she were at least over 18, but this girl is not even a legal adult and already is pro at selling her body. What do you think of her promiscuous tweet and philosophy? Is anything the Kardashian Klan does classy?