A Pussycat Dolls Reunion Would NEVER Happen Because Of Nicole, Says Former Bandmate 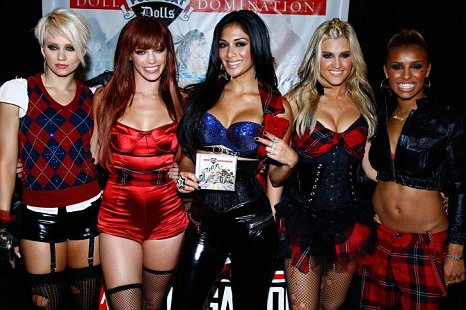 Carmit Bachar has been getting a lot of attention since her last outburst a week ago when she had said Nicole Scherzinger was the reason the band had split in 2010. According to the band member, Nicole was demanding and envied anyone who had blonde hair and blue eyes as she had always wished she looked like Ashley Roberts. Now, Carmit says a Pussycat Dolls reunion would never happen, adding that there is way too much water under the bridge for all the girls to work with Nicole ever again.

Scherzinger, who is currently working on the UK’s version of X Factor, doesn’t actually talk to any of the girls anymore and didn’t even bother calling Carmit when she gave birth last year — not even a text. “Nicole tried to do a solo album, but it did not work and I think that hurt the label and everyone else in the end,” Bachar told The Sun. “I heard she did a ton of demos which weren’t cheap. In a scramble they tried to get the Dolls to do a second album.”

Bachar, who decided to quit the group in 2008 continued that their last album Doll Domination was pretty much songs that were supposed to have been on Nicole’s forthcoming album at the time, but after her debut solo album flopped, they were put on the PCD record instead. “They weren’t really hot album songs, it didn’t sound like us. I think that’s when the other girls decided they had reached the end of the road.” Asked on who she still stays in contact with, Carmit continued: “I’m still good friends with Ashley – she’s my soul sister.

“All of the Dolls are still friends, apart from Nicole. Nicole knows I had a child, my daughter Kaela Rose last year, but she never got in touch. A Pussycat Dolls reunion isn’t out of the question. Five of us – and not Nicole – could happen. But all six? Never. Too much water under the bridge.”