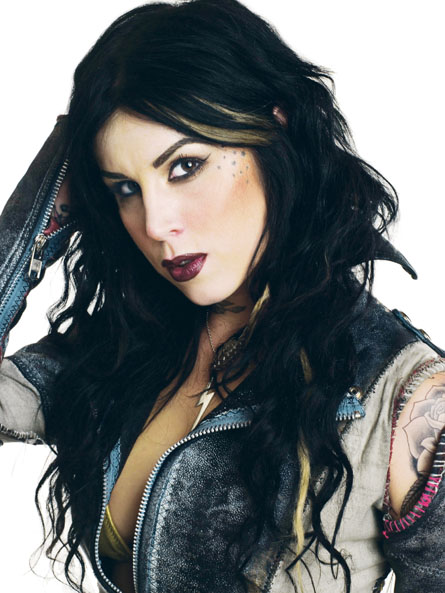 Kat Von D, tattoo artist extraordinaire, is not exempt from crazy people. A fixated fan, which goes by the name of Michael Nunn, has been obsessed with the tattoo artist over the last seven months. According to TMZ, Nunn’s list of stalker achievements will give the most die-hard of serial stalkers a run for their money. Not only has he been tweeting Kat incessantly, he also posted her home telephone number on the internet! In April, Nunn showed up at Kat’s home and called her phone to let her know that he was there (O.M.G) and in June, he did exactly the same thing during a public event the tattoo artist attended.

According to a TMZ report, a judge recently slapped Nunn with a restraining order that keeps him at least 100 yards away from Kat, and also stops him from contacting her so relentlessly on Twitter. Kat alleges that Nunn “exhibits delusional and paranoid tendencies, including the belief that the FBI is watching him.” In our experience with reporting on crazy people, the ones who are most delusional are usually the rarest gems in the lucky packet of crazies. They are also the most dangerous.

The restraining order is, unfortunately, not yet permanent, but a hearing has been scheduled for later this month that might change the restraining order indefinitely. In the meantime, however, Kat is still stuck with a drooling stalker that could pop up any second and make her life a living hell. Restraining orders might scare off the crazies, but they definitely do not stop an insane person from gaining access into one’s life – if history is anything to go by, restraining orders only exacerbate the problem and cause potential stalkers to become even more enraged.

Hollywood Hiccups decided to do some investigation to see if we could find Michael Nunn on Twitter, but unfortunately, there are about a thousand Michael Nunn profiles on the social networking site, and finding the stalker would be a feat in itself.

What do you think? Do you think the stalker laws are too lax in California? Do you think Kat Von D should try to do more to get rid of this insane person? Let us know your thoughts in the comments below.