Khloe Kardashian Tweets Obsessively About Happy Marriage, Turns To God To Save Her 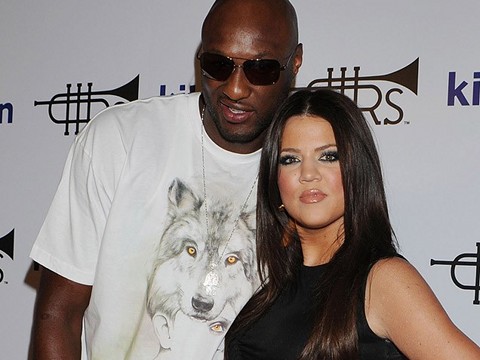 Well this is weird. I’ll admit I haven’t picked up a bible in a while, but if I recall correctly, there are some pretty definitive rules in there about promiscuity, language, and not living in excess. Read: Khloe Kardashian isn’t keen on following the good book to the ‘t’! The seriously misguided celebrity has been all over Twitter trying to promote her happy relationship with husband Lamar Odom–probably just trying to keep it together to boost sales on their new fragrance, Unbreakable Joy. Something tells me the perfume sales would break if their matrimonial joy was called off.

The host of The X Factor USA, however, is all about appearances and so is working overtime to put forward the “happy wife” image. She was in Miami with sister Kourtney Kardashian and Scott Disick for the weekend, but this morning tweeted, “ta ta Miami” and later “almost home 🙂 too excited to see my hubby tonight.” Now, it isn’t as if Khloe doesn’t have people to turn to about her marriage. Look at big sissy Kim Kardashian! She has tied the knot twice, and last time she was eager to admit after two and a half months that it wasn’t working. Surely Kim can suggest a good divorce attorney? Why won’t Khloe follow in Kim’s footsteps and call it quits?

But the strangest thing going on with Khloe’s twitter is her repeated praising of a higher diety. Now, I’m not here to tell anyone what to believe, just to point out hypocrisy and absurdity. Tonight, Khloe tweeted “god is love,” which is funny, because I’m pretty sure I’ve heard her say on Keeping Up With The Kardashians that Christian Louboutin is love. Are they one in the same? If so, that’s a religion I could get on board with! If Khloe is sincere, I really hope this means she’ll be reassessing the way she spends her time–like maybe she’ll stop selling and promoting cheap cosmetics that are cruelly tested on animals? Rejoin PETA? Stop shopping excessively and donate money and time to help orphans in Somalia? Just a few ideas, Khloe! Of course, I would love to see all the Kardashian family turn around and devote their lives to helping others, but Khloe could be the first to lead them to the mountain! What do you think of Khloe? Poser or on the verge of enlightenment? Is her marriage on the rocks?