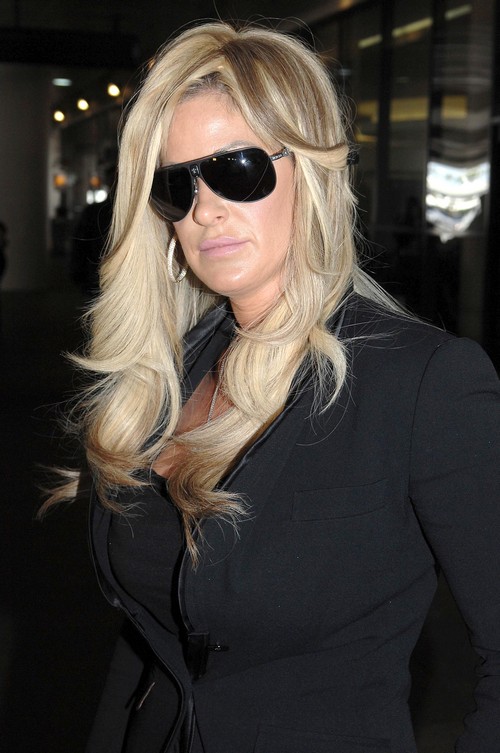 Remember a few months back when Kim Zolciak was the happiest housewife ever? She had her two older daughters, two babies with new husband, Kroy Biermann and her dream house. Well, that was then, now Kim’s life is an absolute mess. She quickly vacated the dream house before her family could be evicted and she recently stormed off from filming The Real Housewives of Atlanta and then quit the series. Yesterday we learned that Kim hasn’t payed her taxes in a decade! Remember all of those expensive gifts from ex sugar daddy Big Poppa? He supposedly gave her a budget of $250,000 a MONTH and many of her big ticket gifts were taxable! Kim could owe the IRS upwards of 7 million dollars and jail time is a strong possibility!

Today brings another huge problem for Kim. Her ex husband, Daniel Dominic Toce has been in jail serving a 2.5 year sentence  for molesting a 15 year old girl, but his release date has now been set. Daniel will be free on February 14, 2013 and that situation may create a huge problem for Kim because he is the father of her oldest daughter! When he was first jailed Kim supposedly began the process of having Daniel’s parental rights terminated but it appears that she never followed through with it so Daniel, in spite of being a sex offender, can request to see his daughter.

Do you think that Kim’s high rolling lifestyle is finally catching up with her? She spent years being greedy and shady but now it seems like maybe she regrets all of that. She does love her kids so the situation with her ex must have her an absolute wreck. Do you think that she’ll fight to keep Daniel from their daughter now? Tell us your thoughts below!