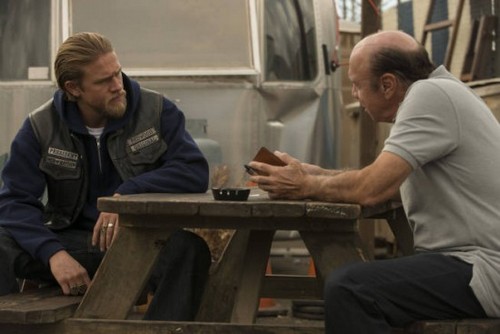 Can you believe it is already the end of season 5 on Sons of Anarchy?  Tonight is the season finale called “J’ai Obtenu Cette.” On tonight’s season finale Jax strikes a new deal while ridding himself of old problems.

Jax continues to get his hands dirty and, in the opening clip of the preview for the episode, we hear him say, “I’m committing to handing over a brother for you to murder.” Jax continues to be faced with challenging choices, ones that continue to influence him, his friends, and, as we’ll see in next week’s episode, his family as well. Jax pulls a gun on someone (watch the trailer to find out who!), and it leaves us wondering . . . will he make the kill? Someone also tells Jax that “he had the chance to be different,” to which he responds, “well, maybe I’m not so different.”

Tonight’s episode looks like it is going to be great and you won’t want to miss it, so be sure to tune in for our live coverage of FX’s Sons Of Anarchy at 10 PM EST!  While you wait for the recap, check out a sneak peek of tonight’s episode below!