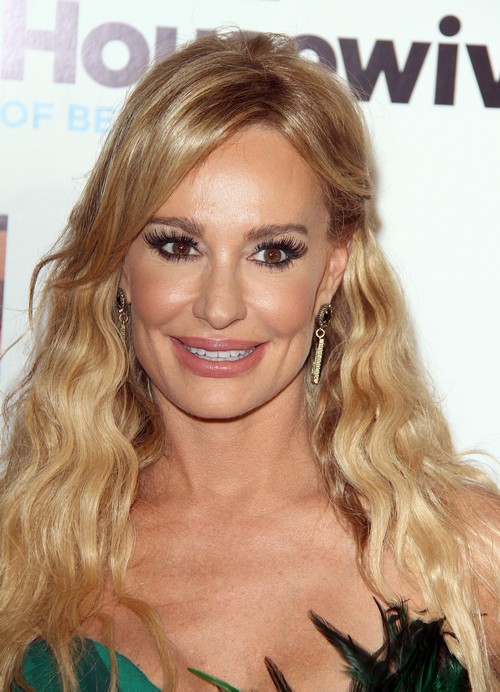 Have you tuned in to the last two season’s of The Real Housewive’s of Beverly Hills? If so then you have watched Taylor Armstrong transform herself from beaten down, overly emotional woman to out of control drunk b*tch that no one can deal with. First she was in an abusive relationship with her husband Russell Armstrong, until he committed suicide well over a year ago. Viewers watched her try to deal with things and continue a somewhat stable life for her daughter, Kennedy. I think we all kind of hoped that Taylor would find her strength and be much better off without Russell. Instead she seems a whole lot worse!

It was rumored that when filming for the current season began, the rest of the cast was concerned by Taylor’s drinking. Now that those episodes are airing it’s very clear that Taylor can’t get through anything without the booze. The woman never really appears sober and in scenes where she once would have cried she is now just mean.  She’s turned into that nasty lush that appears at every party and everyone else in attendance whispers  about them. That’s Taylor. Instead of putting herself back together she has gotten hot and heavy with a (married) guy and she seems to think he’s going to save her. Before Bravo even has the opportunity to fire her, Taylor is contemplating a big move with her new man, according to The Examiner,

“Taylor’s Beverly Hills rental home that she has lived in for years is being sold and she has told her friends that when that happens she will probably leave Southern California with her daughter, Kennedy, and move to Colorado to be with John. He lives just outside of Denver and Taylor is ready to start a new chapter in her life after all the insane drama she has been through with her husband, Russell’s, suicide.”

Bad move Taylor. Don’t hand your still broken self to some random guy to fix! It will also end badly and that will be another relationship that Kennedy will wish she never had to witness!  Do you think Bravo execs have suggested rehab and hardcore therapy, or are they just enjoying the show that Taylor has been putting on? Tell us your thoughts in the comments below!