New Video Shows Kris Jenner Desperate For Khloe Kardashian’s Attention: Is Khloe Breaking Up With The Other Kardashians? 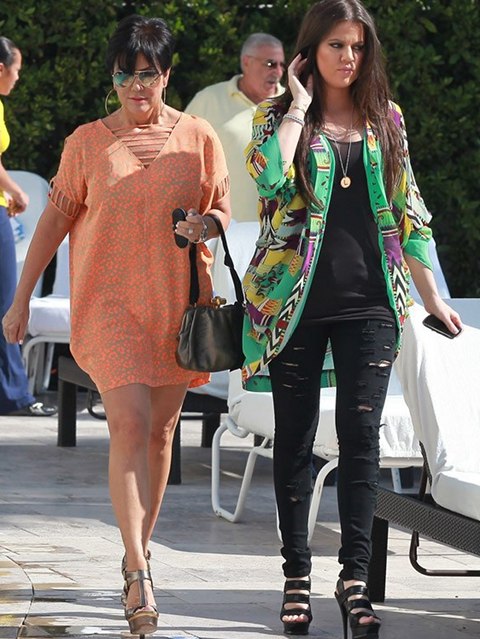 Have we been too quick to judge infamous momager of the Kardashians, Kris Jenner? We’ve been disgusted for ages with a lot of her unique mothering traits–letting her kids ditch high school to model and act, pumping up on plastic surgery, shopping around sex tapes of Kim Kardashian, selling the family secrets out to reality TV…the list may be infinite, actually. But could that all be in the past? A new video shows a really excited, loving looking Kris backstage with Khloe Kardashian during a taping of The X Factor USA. In a move that reminds us all of the awkward pre teen phase, Khloe totally ignores her mom!

A video Kris uploaded to Keek shows the mom of 6 cheering on her daughter. “This is Khloe getting ready to go onstage and she’s doing a great job tonight, so hope you guys tune in tonight!” Khloe refuses to smile or look at her mom or the camera until the very end, as she turns away and says, “oh hi.” I can’t believe I’m saying this, but I actually feel bad for the ruthless momager! Khloe was behaving like an adolescent bitch, refusing to acknowledge her mom! If you’ve watched Keeping Up With The Kardashians, you know that Kris’s antics are usually received with cheers and excitement, not with sullen, furitive glances. I expect Khloe may try to blame her behavior on stage nerves or focus on the show, but really! Does focusing mean you can’t smile?

I wrote last night that Khloe accidentally let slip, that her mom would do anything to get a 10% cut of her daughter’s profits…could this be the beginning of the demise of the Kardashians? Two PR mishaps in a row can’t be coincidence–maybe for normal humans, but not for the most choreographed family in Hollywood. You can check out the video below and see for yourself. Do you think that Khloe is trying to distance herself from her mom? Is she going to break away from the klan to pursue the “private interests” she hinted about last season on KUWTK? Let us know what you think!