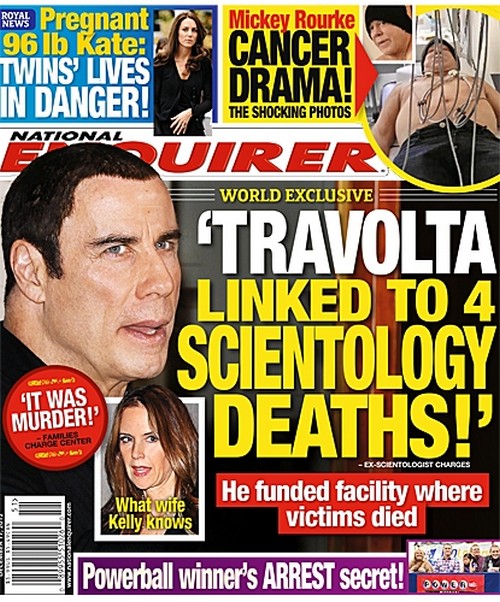 2012 really has been a lousy year for John Travolta, hasn’t it? If he has made any hit flicks they have totally been overshadowed by all the rumors and lawsuits regarding either his sexuality or his devotion to Scientology.  The latest instance where John is being dragged through the mud involves Scientology’s own personal version of a rehab facility, known as Narconon Arrowhead located in Oklahoma.

It seems he and his wife, Kelly Preston have made staggering financial contributions to the facility that is now being directly blamed in four wrongful death suits!  According to the latest issue of The National Enquirer, the authorities are now blasting the facilities methods of treatment, calling them “medically unsafe” and “quackery”. Even the former president of the facility, Lucas Catton agrees with law enforcement and he is certainly in a position to know!  Still Travolta backs Narconon and offers the facility his full support!

Also in the new issue of The Enquirer you can learn all about that seemingly quiet couple that just won the Powerball. Mark and Cindy Hill won a staggering $293,750,000 and will take home about $136.5 million in a lump sum payout after taxes. Every family has their issues and some secrets locked away, including the Hill’s!  One of Mark’s sons, 30-year-old Cody, has a shocking past that all the money in the world can’t erase and you can read all about his sketchy past within these pages!

Is Kate Middleton expecting twins?  A lot of royal watchers’ seem to think so and so does the Enquirer. I’m not sure about how many babies the duchess is actually carrying, but the mag is right about her being at risk medically. That is now common knowledge further emphasized by her London hospital stint this week. Maybe it is twins? Grab the latest copy to find out more!