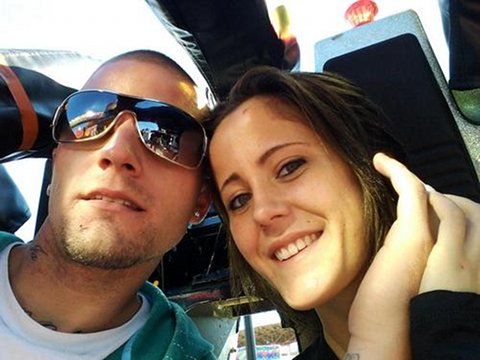 If there’s one thing we can count on the cast of MTV‘s Teen Mom for, it’s to do everything with grace and class. Wait–I meant with criminal charges and an emergency stash stuffed in an orifice. This morning, troubled mom Jenelle Evans got married to her boyfriend of four months Courtland Rogers. Her beau made his intentions known last week, when he tattooed her name across his heart. We were seriously shocked to learn that she got married this morning, and were practically on the floor in convulsions when her sister explained that she did it to get custody of her son Jace back from her mom Barbara Evans! Because, you know, judges love it when you’re legally married to a felon. They also love putting kids in homes with chronic drug abuse! This is just further evidence that she cray cray.

But why did the couple really tie the knot? I think it was to save gas! A source explains why they were at the courthouse: “Courtland Rogers was charged with a felony in North Carolina on Tuesday for obtaining property by false pretenses. Straight after that court hearing was finished Jenelle and Courtland got married at the magistrate’s office.” How did that conversation go? “Babes, gotta go down to the courthouse cause I did lied or something.” Jenelle: “Let’s just like, get married while we’re there.” Ta da! True love! An eyewitness reported that Jenelle was no blushing bride, and that she’s lost too much weight and is looking pretty scary. And the groom? Well, he was “picking scabs on his face while he was in the court and his face was starting to bleed.”

I think it may be time for me to officially turn away from this train wreck. It is just too disturbing! We’ve followed Jenelle through her ups and downs, her tearful, marijuana loving break downs, her screaming and cursing fits at her mom, and that one episode where she had a job for a few days. This girl needs to get her act together if she is serious about earning Jace back. Do you think Jenelle should be married to Courtland? Will he encourage her to be a better person, or just bring her down?

Are You the One?: Uche Nwosu And Clinton Moxam Get Married In Chicago Among Friends…