Lamar Odom Wants To Become A Rapper, But Khloe Kardashian Says No! She Wants To Stay A Baller Wife 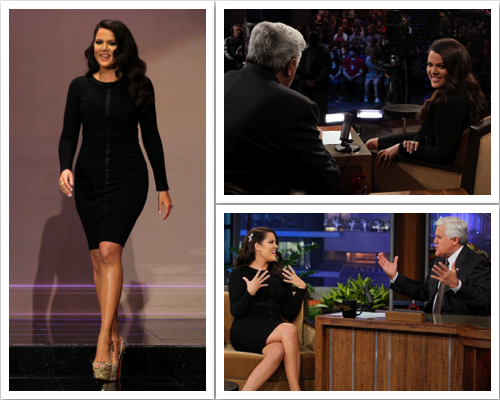 How downgrading would it be if Lamar Odom seriously changed his career from basketball to rapping? We already know that Khloe Kardashian would ditch him faster than he can run with a basketball. Ha. So, Khloe recently sat down to do an interview with Jay Leno about her fabulous life after landing the role as a host on the X Factor two months ago. She also talks about her marriage to LA Clippers star Lamar Odom. We must give credit to this woman, considering that she’s a Kardashian, she’s managed to keep her husband longer than 72 days. Ha.

She went on to reveal that Lamar has a passion for rap music and actually writes his own rap lyrics before sending them off to Kanye West to listen to. According to Khloe, Kanye really likes the kind of lyrics Lamar writes but Khloe isn’t having any of it. She wants to make sure her hubby keeps his eye on the basketball and off the paper and pen — she doesn’t want to be downgraded as the rapper’s side chick.

“I just don’t like to encourage it too much because he gets really excited and he sends Kanye lyrics. Kanye likes them and they kind of, like, egg each other on, but I’ll be like, ‘Kim, I’m so sorry, he did it again last night. Like, I’m so sorry’. He’ll send Kanye crazy rap lyrics.”

Khloe goes on to recall the time Kim was surprised as to how much effort Lamar puts into rapping:

“We were in Australia once and Lamar was rapping and Kim was like, ‘How do you do this? He raps so much!'” she joked. “I was like, ‘Hello? Look what you’re dating right now – a rapper! This is what you get!'”

Khloe has a lot to be happy about, she needs to stop being so controlling and let Lamar do what he wants to do. She’s probably just saying all of that for attention, considering that the ratings were strong and solid for X Factor since its second season debut in September. X Factor continues to average at around 8 million viewers compared to American Idol which gets up to 19 million people tuning in every single week.