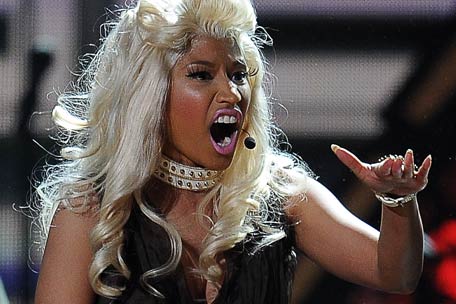 Nicki Minaj‘s team have vented out on Twitter after finding out she had been snubbed from being nominated at next year’s Grammy Awards. The singer, who achieved a platinum selling album with Pink Friday: Roman Reloaded earlier this year, was said to have been upset that producers had not taken her success since last year’s Grammys into consideration. But it seemed like no one was more upset than her manager, Cortez Bryant who explained how he felt about it on Twitter.

Bryant was happy to hear Drake and Lil Wayne – who are all under the same label – had received several nominations in the rap categories, but Nicki failed to make the cut and some people are saying it’s due to her spat with pop singer Mariah Carey two months ago. Though her platinum selling second studio album went platinum, the reviews were terrible and producers of the Grammys take this kind of information into consideration.

Cortez had written on the social networking site:

“Congrats to @LilTunechi and @Drake and @Hit_Boy on their Grammy Noms butttt….. They was on some bulls**t for not nominating @NICKIMINAJ.”

Nicki shouldn’t be too upset because Justin Bieber and One Direction were also avoided from next year’s nominations. While Scooter has already expressed his feelings about the decision for Bieber not to be nominated for any of the awards, Simon Cowell has said that his boy band are not bothered by it at all, adding that they will most likely make the cut next year.

“You know what’s more important? Fans, record sales, I’ve always said that. Maybe next year they’ll get something. Trust me, they’re not complaining.”