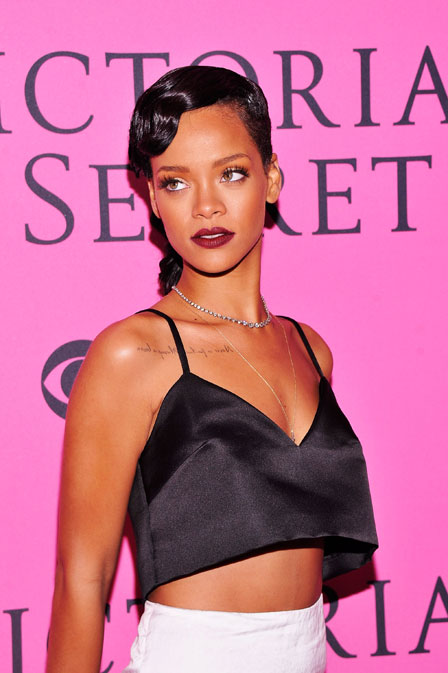 Rihanna has tattooed the word ‘Breezy’ on her body in support of her on-again-off-again boyfriend, Chris Brown. The singer, who has hinted that she is back with Chris by sending out pictures of the two hugging on instagram, is taking her relationship with Brown to the next level by showing him that she’s serious about their romance, letting him know that he comes first before anything or anyone else.

Rihanna’s tattoos are becoming a lot now,- her last one before getting ‘Breezy’ tatted on her was an angel with wings in between her breasts, which she says shows her appreciation to her grandmother Dolly who passed away over the summer in New York. Sources are telling The Sun, this tattoo is to prove to Chris that she’s Team Breezy all the way, she’s committed and another way of telling her fans that the two are back together.

“She got it to symbolise her commitment to him. Now the world knows they’re back together, they’re determined to make it work.”

Meanwhile, Rihanna’s record label have announced that the singer’s next single of her album Unapologetic will be Stay, followed by a music video which she will film in January, 2013. She is set to spend Christmas in Barbados with Chris Brown in hopes that her family can forgive him for what he did to her in 2009.